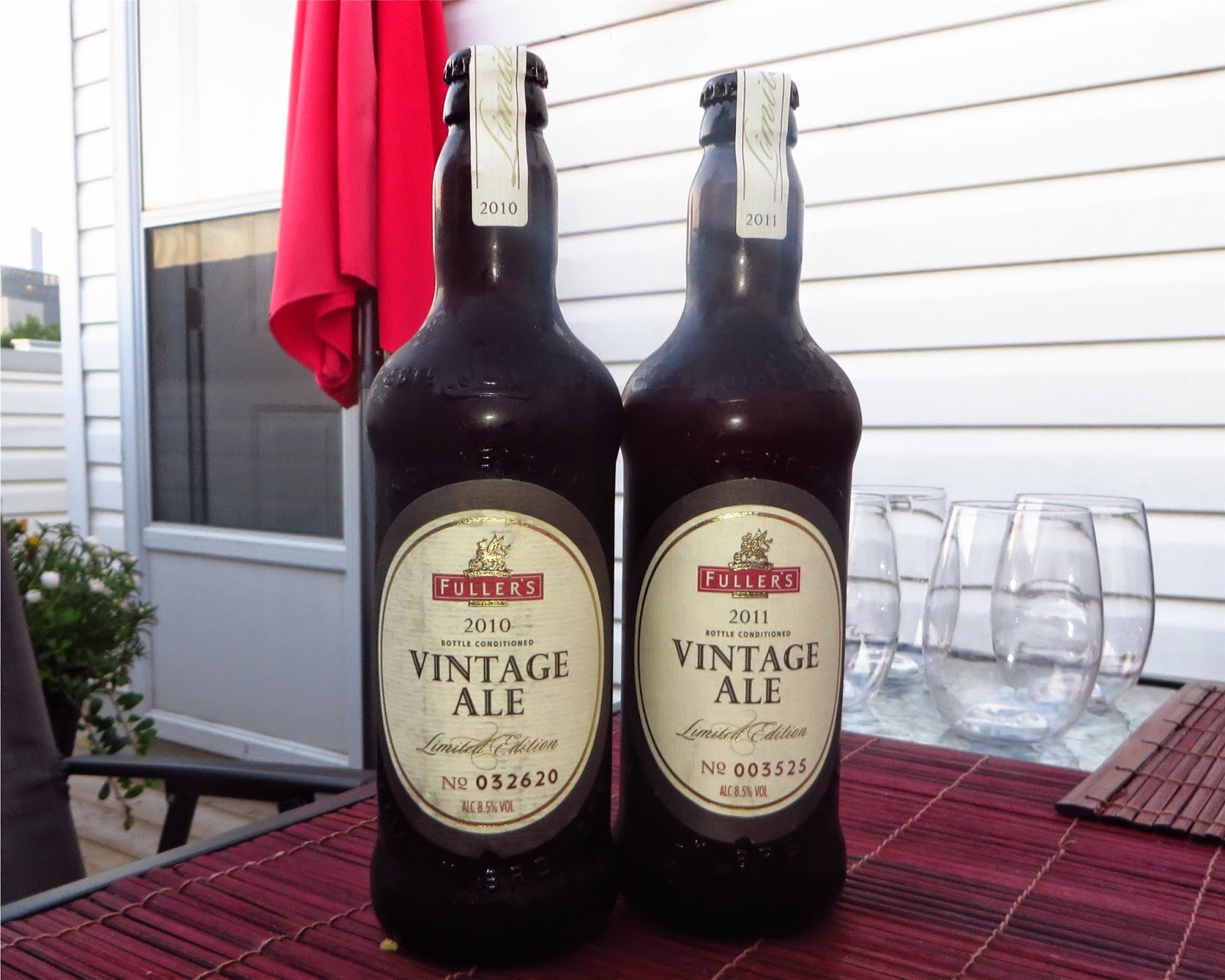 (Note: I'm glad I did this Monday night as I have been sick all weekend. Being sick is not fun but being sick on the weekend really sucks!)

A few years ago, I was faithfully buying and cellaring each year’s edition of Fullers Vintage Ale. I thought that I had done a few posts on them but was surprised to find that I only did two, the 2009 edition and a comparison of the 2008, 2009 and 2010.

Time to change that!

Monday night Teena and I were up at our friends and neighbors', Steve and Simone's, for a BBQ. Steve is a former chef and the food was fabulous!

I brought along with me the 2010 and 2011 vintages of Fullers Vintage Ale. If I had the 2012 and 2013, I would have brought them too but was somehow negligent in buying some when they were available. I told Steve he had to assist me in comparing these two vintages for this week's Beer of the Week and he loved the idea! 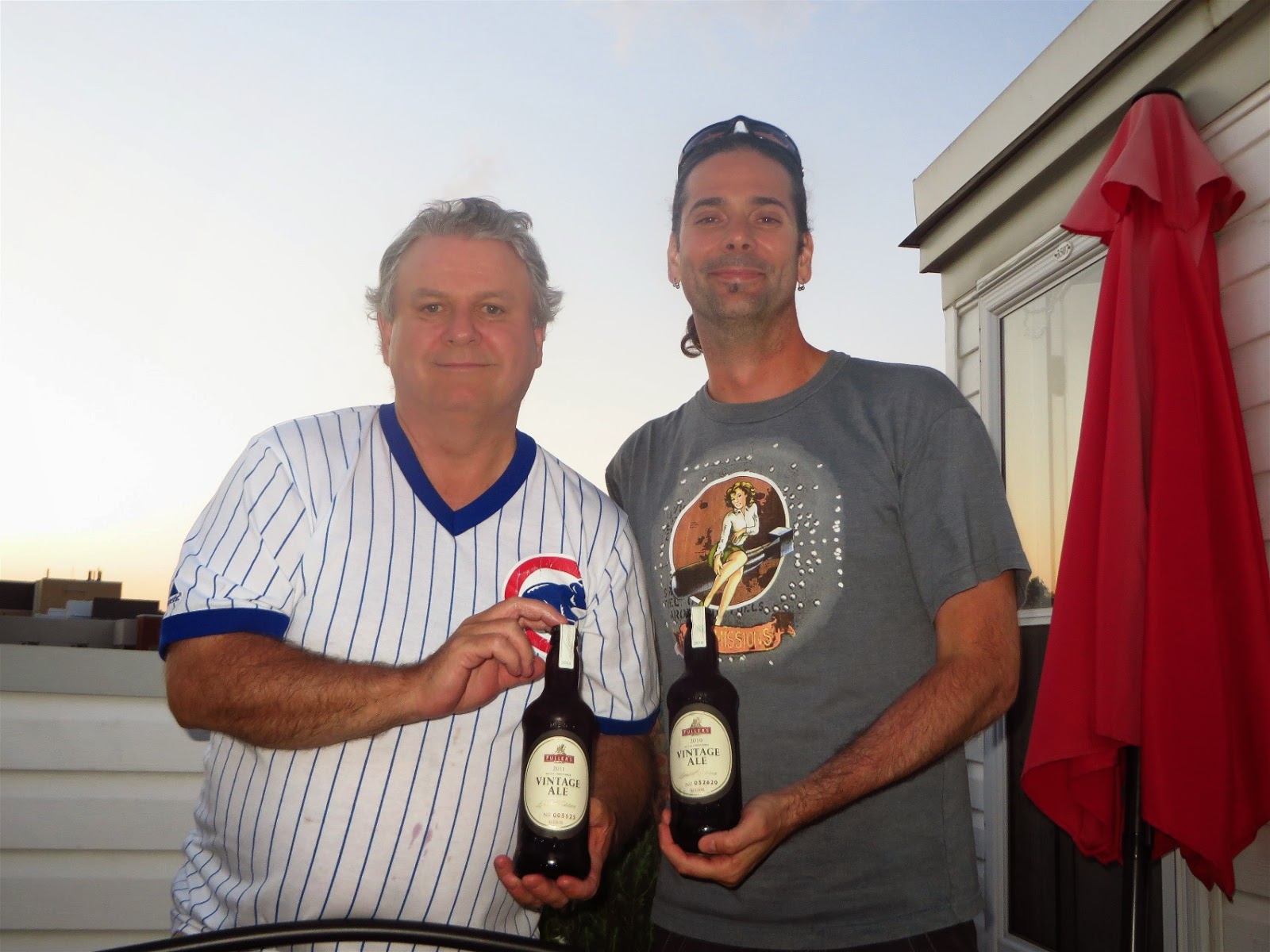 Every year since 1997, Fullers, located in London, England, has created a new Vintage Ale.

Vintage Ale is a truly distinguished bottle-conditioned ale, crafted by Fuller’s Head Brewer, John Keeling. Each vintage is a blend of that year’s finest malt and hops, and of course our unique yeast, creating a unique limited edition brew. Bottle conditioning means that a little yeast is left in the bottle after bottling, which will mature slowly over time like a fine wine or whisky - well beyond the 'best before' date that we are obliged to state (we think it should read "best after!"). 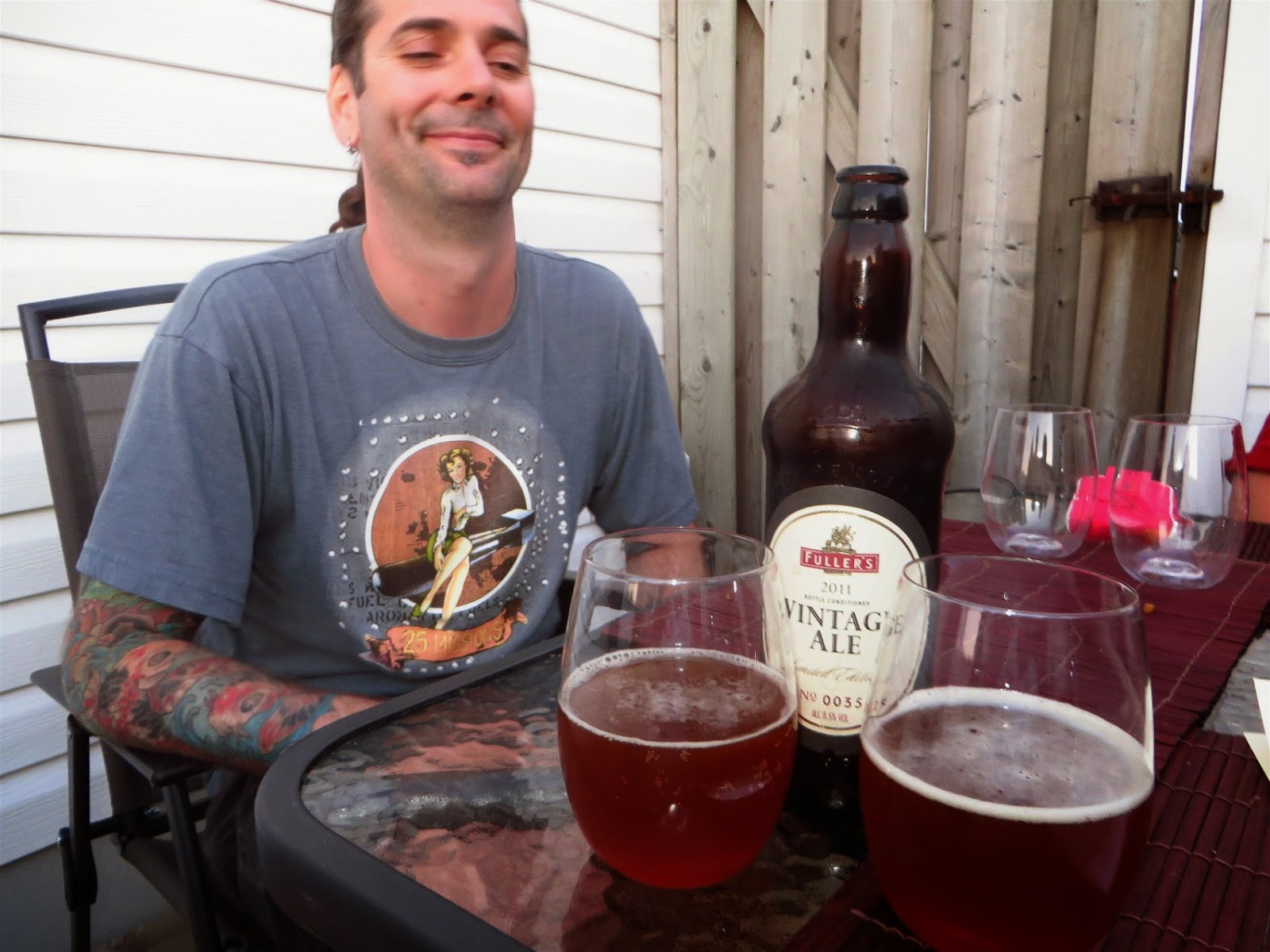 The malt grist includes a portion produced by Warminster maltings, from organic barley grown by Sir James Fuller on the Nestone Park Estate. This will be married with the choicest Goldings, Organic First Gold and award winning Sovereign hops, to produce a beer with a firm malt base, marmalade notes and a satisfying bitter finish. Individually packaged and numbered, this bottle is one of only one hundred and fifty thousand produced. 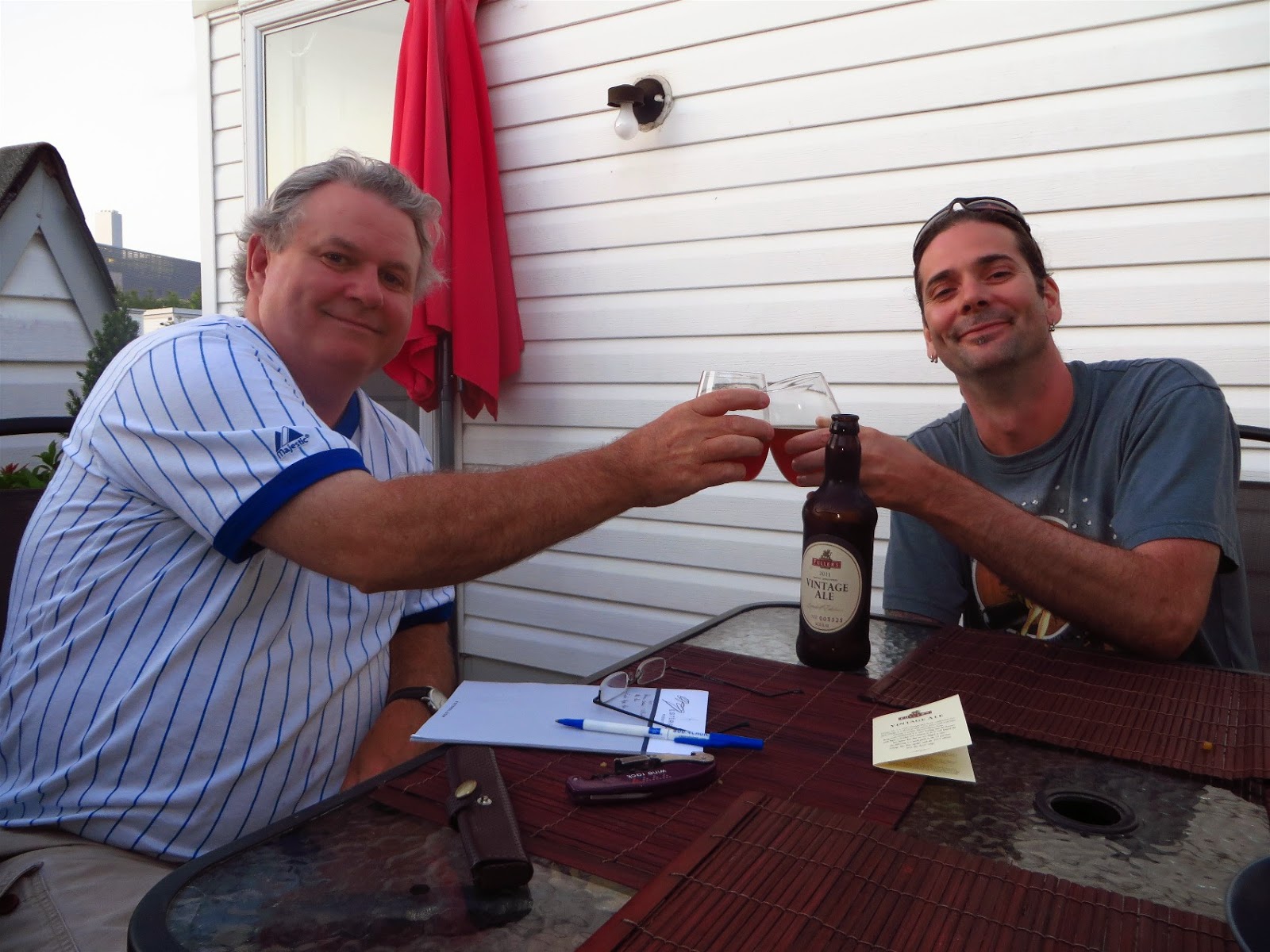 This one poured browny-orange in colour with an off-white head. Nice lacings are left behind when we sip. I love the aroma of English hops. They're not citrusy as an American hop or piney like other hops, just very unique and enjoyable.This is a little more carbonated than I expected. It starts off malty but quickly the hops come through to balance the sweetness. There is an earthiness to the flavour which I quite enjoyed.

Steve, whose nose is far more efficient than mine, found marmalade and mulched leaf funk in the aroma. I love doing this with other people. I get to learn a whole new vocabulary. Where I found it nicely carbonated, Steve did not. There never is any right or wrong to tasting, just what you feel. He found the beer "really nice ... floral with wet leaves. It's delicious, sweet without being sickly sweet."

For me, I'm glad I still have one more cellering for next year. 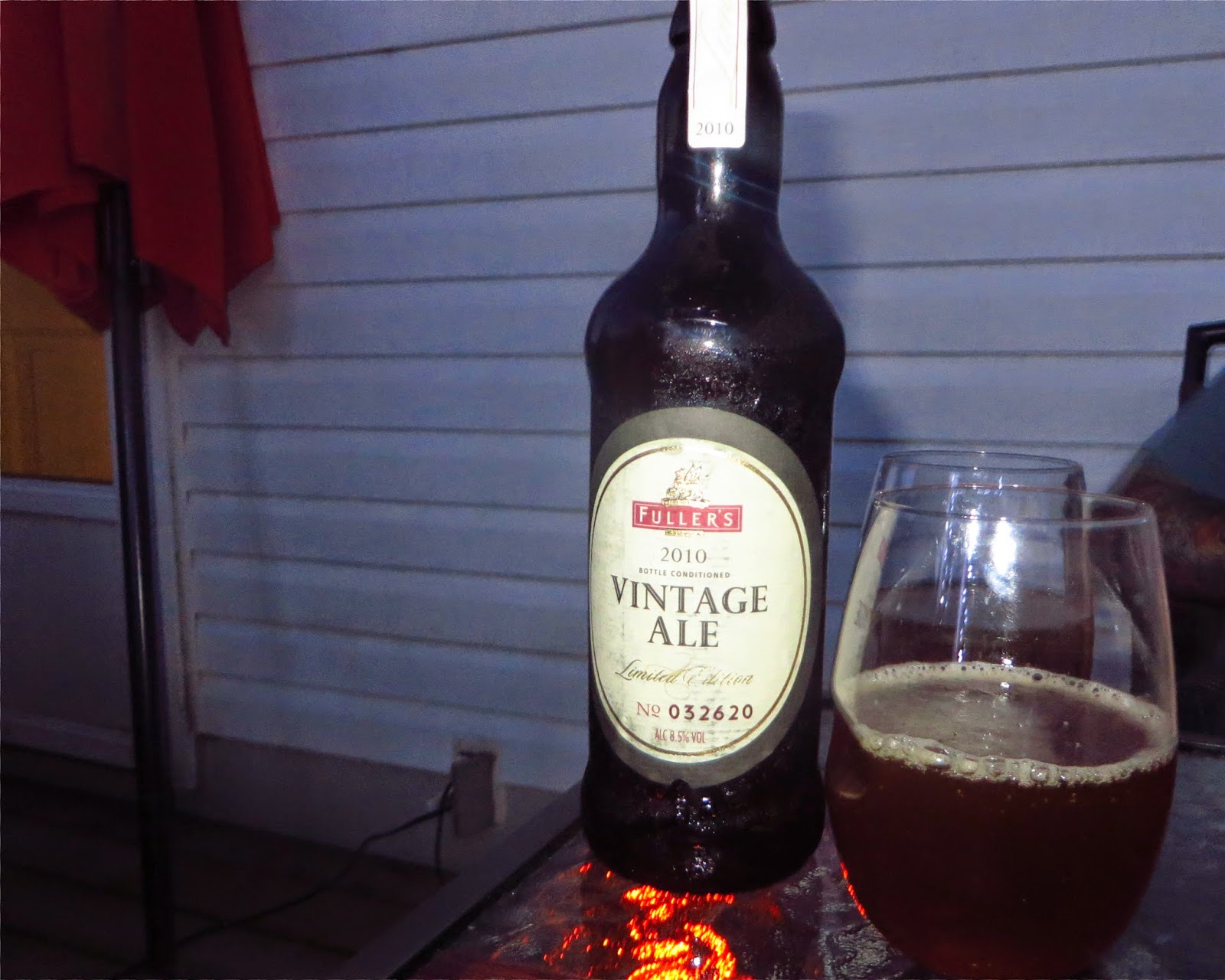 Crafted with the highest quality Tipple malted barley, this ale's main hop character is derived from traditional Golding and Fuggle hops and further enhanced with dry hopping, using a blend of the choicest Golding and Target hops." Seems this is the first year that dry hopping is used. Coupled with the unique Fuller’s yeast strain we expect this beer to mature into another ’Classic’ Vintage! 125,000 bottles produced. 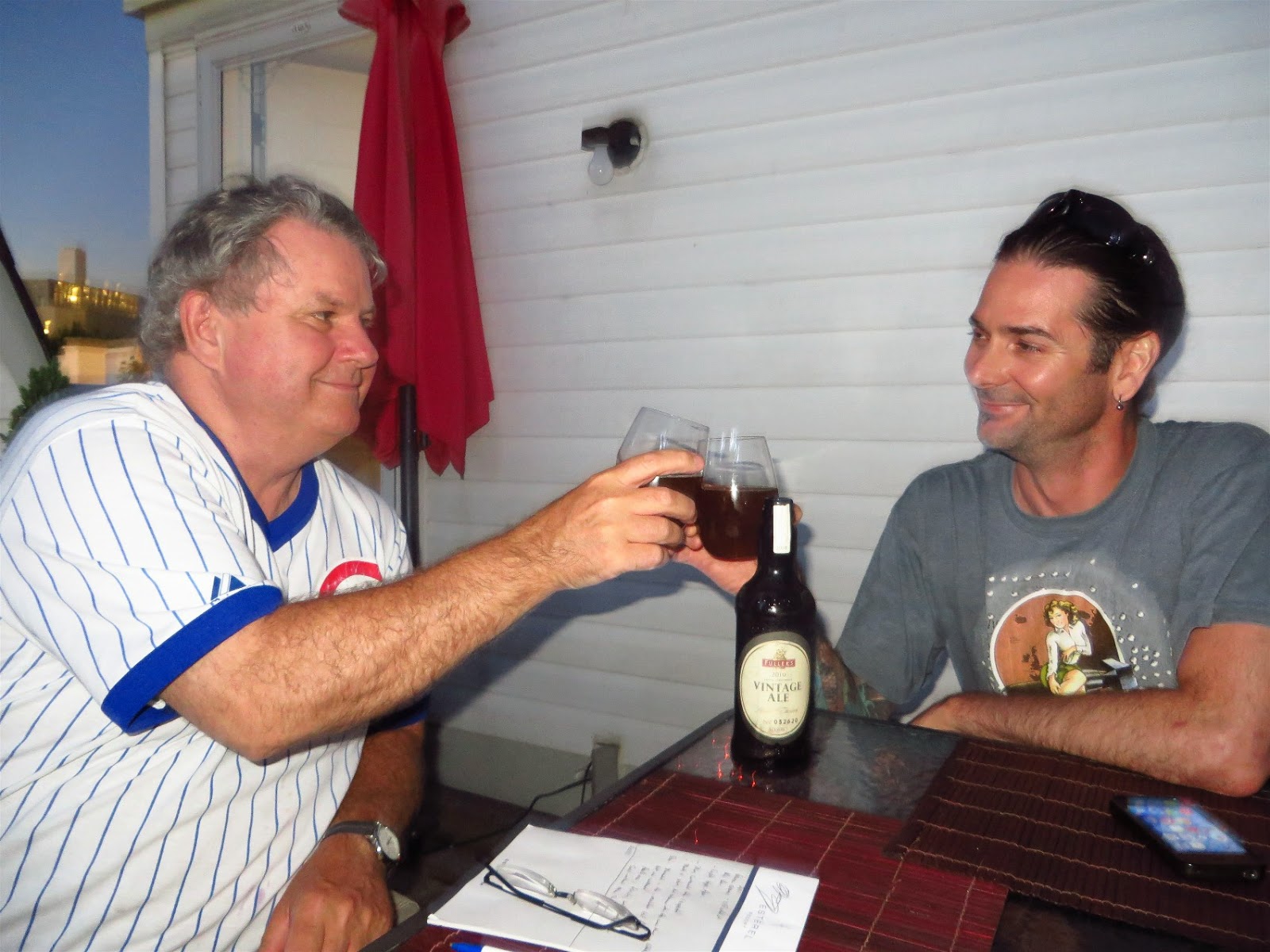 We both agreed that the 2010 is more brown than orange. Again, I found an earthiness in the aroma with no hop presence. I found this one less carbonated than the 2011. This is a beautifully balanced ale full of malt sweetness and pleasant hops coming through in the end, plus something else that I will address in a moment.

Steve found some bitterness along with "some funk in this, plus there seems to be something hanging around after the funk." He also found there was a dark note to this.

One thing we both were surprised at was that there seemed to be what we can only describe as an "interlude" in the middle of each sip. A point that I have never come across before where all the flavour just stops, something clean and cleansing comes in, before the flavour starts again in the second half. Steve described it as metallic but not in a bad way. I can see where he is coming from with that but I have a different impression, one I have no words to describe. We agreed, though, that it was a surprising enjoyable quality in this wonderful ale.

A group of friends tried this back in February of 2011. Here is what we said, "We decided that we would withhold official judgment on 2010 as we felt it needed another year to age and work. Interesting thought ... I hope next year we all find this one to be a superb beer."

It was one very superb beer!

Thanks to Steve and Simone who had us over for some great food and participated in the tasting. Simone not only took the pictures but had some sips and wasn't crazy about either. Teena would just have a smell, crinkle up her nose and then pass it back. I think she described it as "Yuck!" Maybelline joined us but did not participate. 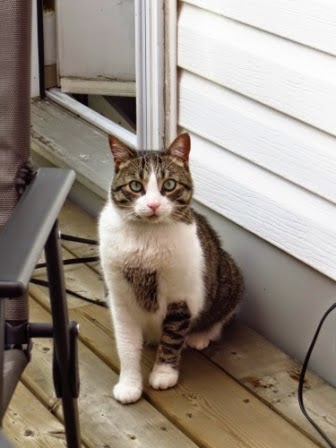