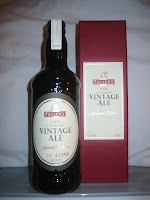 Up until this past fall, I was the typical "buck a beer" guy. A few years ago, I decided it was time to lose weight and searched out the most flavorful light beer, which turned out to be a "buck a beer" PC Light. Every once in awhile, usually on holidays, I would treat myself to something special. I also started purchasing something different each week for my Beer of the Week.

It was after tasting so many great beers weekly that I no longer am devoted to saving money by buying the cheap brands. It was a little difficult at first to be paying the extra for beer but I sure was enjoying it. Teena would laugh when I complained about paying the extra ... she seems to believe that I have a cheap streak in me but I consider myself just careful with how I spend.

I seem to have broken out of that. Teena was surprised and shocked when she saw me grab not only a single bottle of beer which was around $4.50 but also this $6.95 bottle of Fullers Vintage Ale. No complaints ... I just ran to the cashier and happily forked over the cash. It was the final vindication that yes, I had indeed change my beer drinking ways.

The value is in the taste and the adventure of trying something new!

Fullers started brewing their Vintage Ale in 1997. Their idea was to use basically the same recipe, slightly tweaked from year to year, the same yeast, but use the only the very best malt and hops of that year.

No marketing trick here. If you go to their year to year Tasting Notes, they describe which malt and hops were used for that years vintage and give their interpretation of the taste. The taste of course changes with each annual batch as the ingredients used are of a different variety.

Fullers Vintage Ale is also bottle conditioned and will get better and better the longer it sits. The idea is to sample a bottle each year to see how it has matured. According to their website, and on the box " Bottle conditioning means that a little yeast is left in the bottle after bottling, which will mature slowly over time like a fine wine or whisky - well beyond the best before date that we are obliged to state (for my beer that is 2011). Here at Fuller's, we recently opened (in the interests of research, of course) a few bottles of old Vintages: they tasted better than ever."

Now to the good part ... the pouring and tasting. 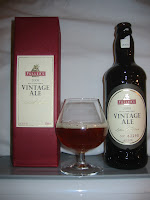 I had high hopes for this. What if I spent $6.95 and it was nasty? To be sure that there were no problems caused on my end, I looked to their website for instruction on how to pour and drink. "We recommend Vintage Ale be consumed at cellar temperature or 52ºF or 10ºC. Pour it slowly into a Cognac balloon and allow the beer to breathe. Then sip it on its own ... and feel the warmth of the season come upon you."

It poured into my snifter with a nice head with a deep rich golden colour. And the taste? I had no need to be worried about the taste.

It was full and complex and wonderful. When people used to explain that this wine or this beer was "complex", I really didn't fully appreciate what they meant until I had this.

It seemed like different flavours were constantly coming through as I let it settle in my mouth before swallowing. Without trying to sound like I'm going completely overboard, each sip was an experience, a very enjoyable experience.

So what about "Buck a Beer Gord"?

Well he's completely reformed and heading back down to pick up some more of these for $6.95 ales for aging. It'll be interesting to see how this year's compares to next year's vintage.