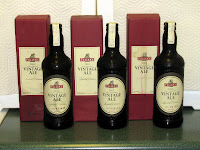 Two years ago I did my first tasting of a Fullers Vintage Ale, their 2008 edition.

Fullers Vintage Ale is bottle conditioned and will get better and better the longer it sits. The idea is to sample a bottle each year to see how it has matured. According to their website, and on the box "Bottle conditioning means that a little yeast is left in the bottle after bottling, which will mature slowly over time like a fine wine or whisky - well beyond the best before date that we are obliged to state. Here at Fuller's, we recently opened (in the interests of research, of course) a few bottles of old Vintages: they tasted better than ever."

I bought three with the idea that I would have one each year and have other years to compare it to. In 2008, when I started, I only had the one which I described as ...

"It was full and complex and wonderful. When people used to explain that this wine or this beer was "com 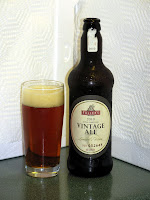 plex", I really didn't fully appreciate what they meant until I had this.

It seemed like different flavours were constantly coming, through, as I let it settle in my mouth before swallowing. Without trying to sound like I'm going completely overboard, each sip was an experience, a very enjoyable experience."

To my horror, I found that last January when I did the 2009 to 2008 comparison, I did not post about it. My God! How the heck did that happen? To quote the original Chairman of the Iron Chef, "If memory serves me correctly" I enjoyed the 2009 more than the one year aged 2008, although memory may not have served me correctly..

Fullers started brewing their Vintage Ale in 1997. Their idea was to use basically the same recipe, slightly tweaked from year to year, the same yeast, but use the only the very best malt and hops of that year and only brew as much beer as their ingredients allowed for. For the Vintage Ale Fullers measures production in bottles produced not cases. In beer terms, the amount is very limited.

To ensure the 3 years are properly judged, my friends agreed to come over to watch the Superbowl and assist with the tasting. From left to right is Judge Alfred, Presiding Official Craig, Judge Kevin, myself, of course, a Judge and, in front, my son, Ken, also a Presiding Official. 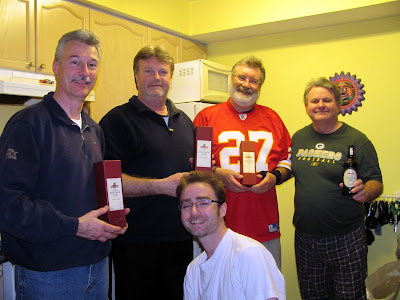 First tasted was the 2010 Vintage Ale - bottle #32,643 of 125,000 bottles produced
"Crafted with the highest quality Tipple malted barley, this ale's main hop character is derived from traditional Golding and Fuggle hops and further enhanced with dry hopping, using a blend of the choicest Golding and Target hops." Seems this is the first year that dry hopping is used.

We all felt that this was an unfinished beer. Alfred commented on how yeasty it was. It had not yet mellowed and I could taste the bite of the alcohol in this. Definitely one to leave sitting for another year or two. 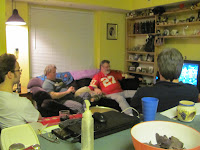 All three of us enjoyed this. Kevin found it a mellow enjoyable ale. Myself, I enjoyed the hops in the finish.

Finally was the one aged the most the 2008 Vintage Ale - bottle #82,129 of 145,000 bottles produced. "Our 12th Vintage features two of our favourite English hop varieties, Northdown and Challenger, combined with floor malted Maris Otter malt."

None of us liked this one. Kevin found it way too sweet and I had to agree with him. Alfred found there was a tang in it which he did not appreciate and did not finish his. Myself, I really found it wanting. Of what I do not know but it definitely was missing something.

And the final conclusion?

We all loved the 2009, head's up winner, and did not enjoy the 2008. We decided that we would withhold official judgment on 2010 as we felt it needed another year to age and work. Interesting thought ... I hope next year we all find this one to be a superb beer.

It was a fun night. My Packers won a very tense game, we had great pizza and I believe everyone had a great time.

Best part is that they are on the road on the way home and I am already there. Tonight we awarded next year's Superbowl festivities to Alfred in Markham. He has a year to plan.

Being a presiding official can be exhausting! 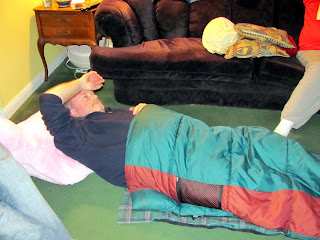 It sounds like you had a fun Superbowl night! The beer tasting was a good idea. Your friend looks like he was a little "sleepy" by the end of the night.

Thanks for sharing your info. I really appreciate your efforts and I will be waiting for your further write ups thanks once again.
Super Bowl 2012