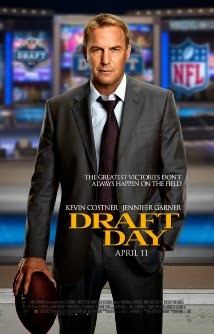 Today I went to see Draft Day with Rick, Malcolm and Tom, all of us who are sports fans.

On the day of the NFL Draft, general manager Sonny Weaver (Costner) has the opportunity to rebuild his team when he trades for the number one pick. He must quickly decide what he's willing to sacrifice in pursuit of perfection as the lines between his personal and professional life become blurred on a life-changing day for a few hundred young men with dreams of playing in the NFL.

First thing. The writers try to bring a love story angle into this movie in a bid to draw woman to the theater but it really doesn't work.  If you're not a sports fan, you would hate this movie.

Second, the trade made to get the number one pick overall is so highly implausible that if any manager did it in real life he would be fired instantly and the fans would cheer the firing, not applaud the trade. I'm not giving anything away here as this all happens early in the film.

I give it a 5/10, which I think my friends feel is too high. I can't believe that both IMDB and CinemaClock both give this a 7/10. In any case, wait 'til this movie comes on TV.
Posted by Swordsman at 17:09