Beer of the Week - Dos Equis 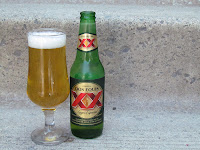 It occurred to me this week that I have not yet featured a Mexican beer in my Beer of the Week posts.

There are only three counties in North America and, in 176 posts, I have completely missed one. Today I correct that omission.

I actually have had this in the past but not for over 10 years. Teena and I spent our honeymoon on the Mayan Riveria in Mexico and I was thankful to find Dos Equis. You see, I just do not like Corona and was glad I found a substitute.  I even came home with the tee-shirt, which surprisingly still fits. It must have stretched! Anyways it's 10 years later and time to have one again!

Dos Equis Cuauhtémoc-Moctezuma Brewery was founded in 1890 as Hielo y Cerveza Cuauhtémoc (Cuahutemoc Beer and Ice) factory in Monterrey, Mexico by a group of seven and 150,000 pesos. Although not Mexico's number 1 brewery (that title is held by Grupo Modelo makers of Corona. The brewery has captured 63% of the Mexican market), it still is large enough to warrant breweries in Monterrey, Tecate, Navojoa, Guadalajara, Toluca, Orizaba and Chihuahua. 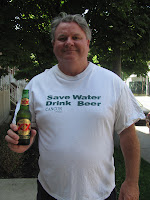 Dos Equis was originally created as a beer to celebrate the coming 20th century. Originally it was named "Siglo XX" which means "20th Century" and each bottle had "XX" on its label. Later the name of the beer was changed to Dos Equis which makes sense as it is Spanish for 2 Xs.

It was created in 1897 by a German born Mexican brewer, Wilhelm Hasse. This surprised me until I read a little about the history of Mexico. France invaded Mexico in 1863 and installed Austrian born Maximilian as Mexico's newest Emperor.  This encouraged Austrians and Germans to immigrate to Mexico. Apparently Emperor Maximilian loved his beer and sought out German brewers to set up breweries there.

It was a very short reign for Max, as he was installed as Emperor in 1864 and was executed by rebel forces in 1867.

Revolution also played havoc with Cuahutemoc Beer and Ice. The Mexican Revolution broke out in 1910 and the original founders threw their support behind Victoriano Huerta and because of this, his rival, Venustiano Carranza seized the brewery causing the founders and their families to flee to Texas. It was only through diplomatic intervention of the U.S. and Russian governments which allowed the founders to get their brewery back. 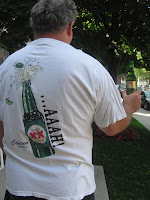 In the 1980s, the brewery incurred huge debt and because of this sold off 22% of its business to John Labatt of Canada. In 2010, the entire company was bought out by Heineken.

I have to mention their hugely entertaining and successful "Most Interesting Man in the World" advertisements. Featuring Jonathon Goldsmith in the title role, the ad first came out in 2006.

"His reputation is expanding faster than the universe," says the voice-over. "He once had an awkward moment just to see how it feels. He lives vicariously through himself. He is the most interesting man in the world." We next see the bearded man seated at a lounge banquette, surrounded by attractive women. "I don't always drink beer," he says, "but when I do, I prefer Dos Equis. Stay thirsty, my friends."

Turns out the actor has led a fairly interesting life himself. He rescued a stranded climber on Mt. Whitney, saved a drowning girl in Malibu and enjoyed sailing the high seas with actor Fernando Lamas, whom he took inspiration from for the role. He also called Lamas "the greatest swordsman who ever lived in Hollywood". Being a fencer, that certainly caught my eye.

Goldsmith had a long TV acting career and you have likely have seen him in something during the years as he usually played the guy who is killed during a show. He has been on "Bonanza," "Mannix," "Gunsmoke," "Hawaii Five-O," "The Rockford Files," "Barnaby Jones," "Charlie's Angels," "CHiPs," "Dynasty," "T. J. Hooker," "Knots Landing," "Magnum, P.I.," "MacGyver," and "Dallas" just to name a few.

Enough of all that. It's time to try the beer.

The beer pours a light golden colour with a white head which disappears rather quickly. The colour is light and the beer is easy to see through. I can detect something in the aroma. It's not hops or malt. Corn possibly.

It tastes like a light 4% beer but is 4.5% APV. It starts watery and finishes watery but with a little sweetness. I can't say that I don't like this beer as there is very little taste to this, which means there's just no flavour to dislike. I can't see me buying this again unless I find myself in Mexico desperately trying to avoid having a Corona.

It seems the Most Interesting Man in the World drinks a very uninteresting beer!

Labels: Beer of the week, Mexico