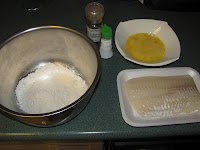 Teena and I returned from Newfoundland Sunday and came back with a vow to try to cook a few things that I enjoyed while in St John's. One of them was pan fried cod.
Yesterday I went shopping and, although I said that I wanted to buy my cod from a proper fish store, I saw that my local grocery story some and I came home with a fillet. Teena had a chuckle when I pulled it out of my shopping bag and likely was thankful she would be in Saskatoon when I took a shot at cooking it.
The recipe is quite simple. For my cod fillet I used:
Sounds easy right? Well, it is!
I added the salt and pepper to the flour. There was no measuring. Next time I would take another couple of shakes of salt.
No measuring? Told you this was easy.
I cut the fillet into 4 pieces, dunked them in the beaten egg, dredged them through the flour and dropped them into the preheated oil. I had the burner set a little over medium. The oil should be hot enough so the fish start cooking right away. The oil covered about a quarter of the fillet. 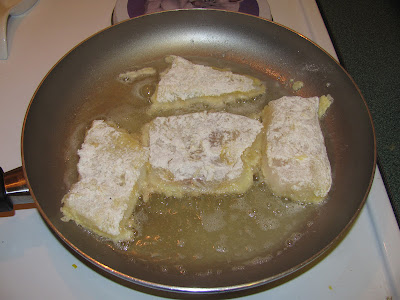 I sauteed them for 5 minutes and then carefully flipped them with a flat wooden lifter and a spatula. 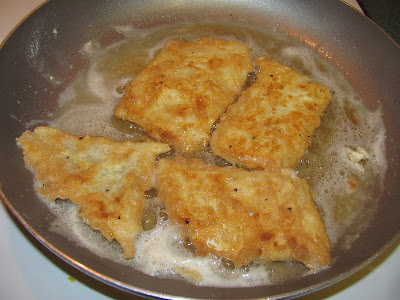 Only the one flip is needed and they stayed in for 5 more minutes before being removed to a paper towel for about a minute. I had no idea if they were cooked through but they looked done, so I took the fattest piece and cut it in half. If it was done, the rest would be done. 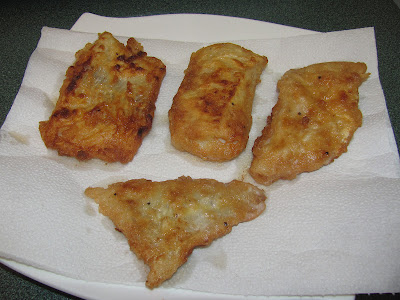 Gordon Ramsey would be proud! The cod was cooked all the way through and was perfectly flaky! 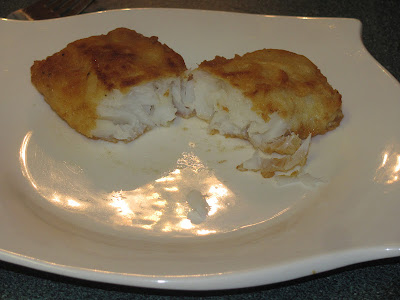 It was delicious, almost as good as what I had in St John's and so easy to make. As I said before, next time I would add a little more salt but herbs or spices could also be added into the flour mix. I had my cod with the delicious potato salad Teena made yesterday.
This is a very easy dish to make so if you like fish, give this recipe a try! 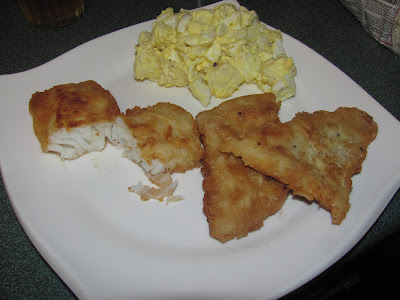 I am looking for something easy and this looks like it will be very easy. As a garlic lover, I have to add fresh crushed garlic somewhere. I'll let you know how it turns out.

Yes, please let me know. I never thought of that

I added the melted garlic butter into the 2 beaten eggs. I dipped the fish portions in the egg and then shook them in a bag with the flour mix. I was very happy with the end result. It tasted great! Thanks for the recipe.

I like that you melted the garlic first before adding. It can be harsh other wise. Going to give that a try myself