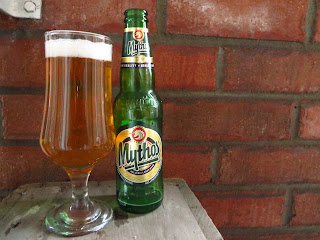 This week I am trying my first Greek beer, Mythos Hellenic Lager, from Mythos Brewery.

The first thing I wanted to find out was just what is a Hellenic beer? I searched the web and books that I have and could find nothing.

The brewery was originally founded in 1970 by Henninger Hellas S.A who distributed their German Henniger Beer to Greece. The brewery was bought out 22 years later and in 1994, was renamed Northern Greece Brewing hoping to become known in the country as "the" Greek domestic brewery. They furthered this ambition by creating a completely Greek beer, Mythos Hellenic Lager in 1997 in Thessaloniki, Greece. 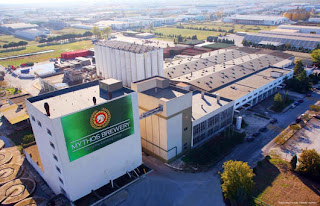 It pours a light golden colour with a decent white head. The aroma is amazing. It's full and a little hoppy. I am looking to this!

Surprisingly there is a very watery mouth feel to this on my first sip. This beer is lightly flavoured and it's sweetness betrays the aroma. I was hoping that the hops might counteract the sweetness in the finish but it does not.

I'm not saying that this is a bad beer. For a person who does not enjoy the bitter finish of a European style lager, this would be for them.

It's just not for me!

Labels: Beer of the week, Greece