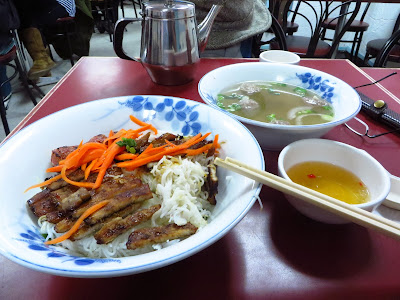 Teena is out of town and this evening.  I decided to try something really different. I have been reading how our neighborhood has two of the best Vietnamese Pho spots in the city. So I hit Pho Tien Thanh at the bottom end of Ossington, just a couple of blocks north of Queen. 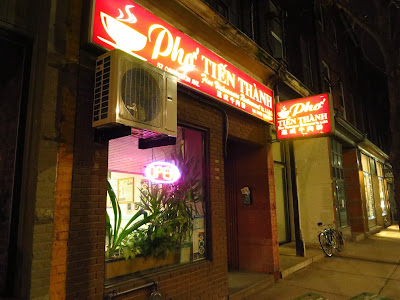 I was surprised at how many people were already there eating at 4:45pm. There was about 15 to 20 people in the restaurant. When they were done, more people came in to take their places. I knew that if I didn't like the food, it wouldn't be because it wasn't good. The place was much too popular for that.

As soon as I was shown my table, I received a menu, a pot of tea, the order ticket, a pot of tea and a small bowl. Seems that you write out your own order. Luckily there were numbers beside everything so I wrote the number and the description. The tea was very good! 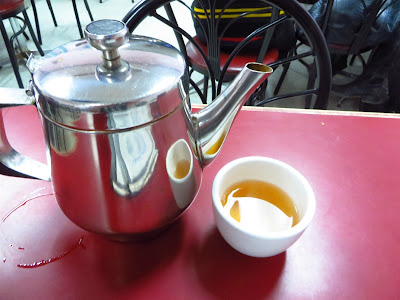 I saw everyone at the other tables with huge bowls but wanted two dishes so I decided on a soup and a main dish. The soup was $4 and the main was $8. Both were huge!

First up was the soup. 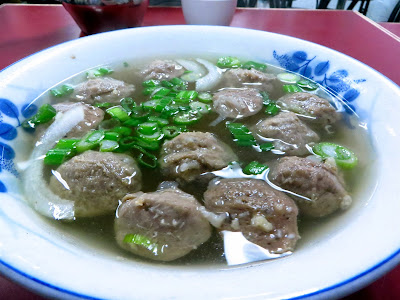 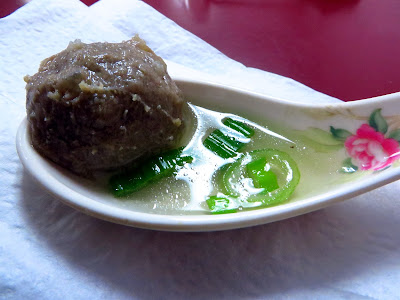 The only way to describe it was that the broth was favorable but with a different taste. The meatballs were chewy and took on the taste of the broth. It was OK.

While I was eating the soup, the server came by with a bowl with a yellowish liquid in it. He left quickly ... he works hard just flying around the place so I asked the people sitting across from me what it might be for. Do I put it in the soup?

The server came back to tell me that it was a fish sauce for dipping my BBQ meat in when the main dish came.

Next up was my main dish. 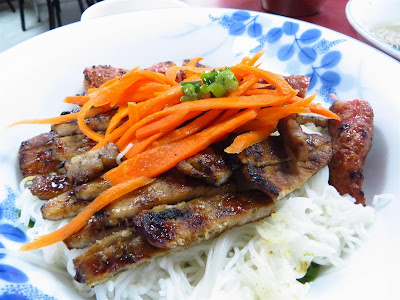 The meat was delicious!The vermicelli was very plain but underneath it was some kind of cabbage, onion and basil. I should have broke up the basil. I tried the fish sauce and didn't really like it. Overall it was OK

Realizing that I was a first timer at Pho (perhaps my awkward use of the chopsticks and questions to the next table gave it away), the owner came over with a takeout menu. Her English wasn't great but she had taken the time to circle things that I would likely enjoy and put an "X" on things she felt I should avoid the next time back.

That was very nice of her and a great customer service move to get me to come back. I liked the food enough to give it another try.

When I got home, I took out my wallet and found a note I had written to myself last week. From the website I had decided in advance of what to have and forgot about it. That item was circled on the list. Now I do have to go back again!
Posted by Swordsman at 19:18