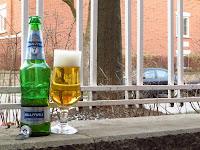 A few weeks ago I wrote about Ochakovo Stolichnoe Premium Beer from Russia. At the time I bought it I thought it was from a different Russian brewery than I have written about previously.

I was wrong though and ended the piece with "Note to self. Next time you find a beer from Russia, make sure it's from a different brewery!"

This week I did just that when I picked up a couple of 500 ml bottles of Baltika Premium Lager from Baltika Breweries.

When I read about the history of the brewery, I was taken aback at how long it took to build Baltika's first brewery in St Petersburg. According to their own website:  Construction of the new factory began in 1978. The state enterprise Baltika Brewery was formed in 1990 right after completion of the construction work. 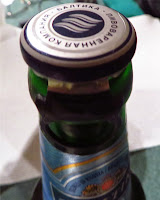 In 1992 the brewery was privatized and it grew. In 1998 Baltika had expanded operations and built more breweries, much quicker than the first one, so they changed their name from Baltika Brewery to Balticka Breweries. In 2008, they sold 89% of the brewery to the Carlsberg Group.

First off, I love the pull tab. No opener required. Just pull back the ring and the beer opens with a pop!

The beer pours a light golden colour that you can see through with a large white head. There is an aroma to this which I could not place. It was not hops though. Although the beer poured with a nice white head that dissipated slowly, there is very little lacings left on the glass. 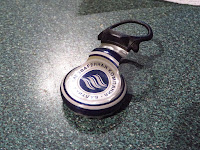 I'm surprised at how sweet this lager is. I thought it would be more like a European lager with a nice hop bite but is the opposite. It is a quite sweet lager. I looked at the label and found that the brewery uses hop extracts instead of real hops. Too bad.

For someone who dislikes bitter beers, this may be for you.

It's definitely not a beer for me.