Beer of the Week - The Beers of Russell Brewing Company 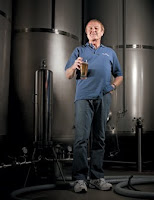 Whenever Teena is away on business, she always comes home with some beer that I cannot get here in Ontario. It's something that I really appreciate especially since there are times she comes back with some pretty heavy bags.

When she came back from this latest trip to Winnipeg, she brought back two beers from Russell Brewery in BC, a Wee Angry Scotch Ale and a Blood Alley Extra Special Bitter.

Russell Brewery, located in Surrey BC, was founded back in 1995. I could not find any information of its history from then 'til the Russell family sold the brewery to Brian Harris in 2004. He is pictured top left.

Most people in their 60s start eying retirement. Not Brian. Instead he did some research and felt he could get into the brewery business and believed he could carve out a niche brewery that stood somewhere between the huge multinational beer companies and the small craft brewery. So he stepped in and bought Russell Brewing.

It seems he is enjoying being a brewery owner ... "No one hates a guy in the beer business," he says, grinning

His plan is to build up the company to a certain point then sell it. It seems to be the type of thing he has done all his life. "At some stage, it'll become professional," he says, "and that'll be a time for someone else to be doing what I do."

Two years after buying the brewery, he took it public and listed the company on the TSX Venture Stock Exchange. In 2007, shares were worth 70¢. It closed on Friday at just 4¢ a share. 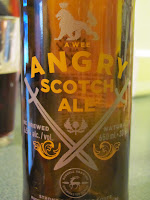 In 2007, in a move usually done by major breweries, he had Russell Brewery become the official beer of BC Place. The next year he came out with BC Lions Lager for Lions football fans. Once the deal was done, BC Place turned to the big boys and signed a multi-year deal with Budweiser.

I have mentioned this before. BC loves their big bottles. The two that I am trying today are both 650 ML bottles. 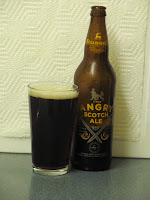 The Wee Angry Scotch Ale won a silver medal at the 2010 Canadian Brewing Awards in The Scotch Ale Group and the same year took bronze at the 2010 Brewers Association World Beer Cup.

"This beer has been brewed with a blend of Scottish specialty malts in the style of a 19th Century 90 Schilling Scotch Ale." The name 90 Shilling comes from the Scottish method of taxing beer. Only the highest quality beers were taxed 90 Shillings. I like the crossed swords on the label.

The Wee Angry pours dark brown in colour with a brown head. Scotch Ales are know for their "malt accent" and this one is no different. Although hops are used, they are not detectable is this brew. Beers like this remind me that not every beer has to be loaded in hops. I am enjoying the malt tones and as the beer warms up, this is a very nice, enjoyable beer.

If someone handed me a glass blindfolded, I would call this a porter, although porters and stouts have chocolate or coffee tones and this one does not. Shows me that I have have much to learn. The medals this beer has garnered have been well-earned and judged by experts who know what a Scotch Ale truly is. 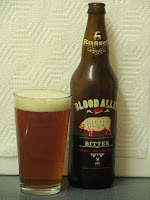 The Blood Alley Bitter is named after "a notorious cobblestone laneway" in Vancouver's Gastown district. Russell introduced this beer back in January 2011.

It pours a deep amber colour with a slight brownish tinge in the head. There are hops to the nose in the aroma. It starts with a bit of a watery mouthfeel but then the fullness of the flavour comes through with a decent hop finish. It is slightly hoppier, more bitter than a normal English bitter, but that's not a bad thing. This is a good beer but not an outstanding beer. I do like it.

Both beers are part of the breweries "Brewmaster Series" and from what I have tried today, Russell Brewing makes quality beers. Maybe I should take a flyer on its 4¢ stock!

Gord, where can I find your email address?