Fencing at the OCC Finals 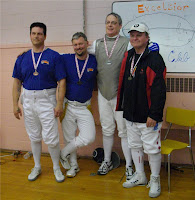 Finals held in the gym of St. Louis Church in Waterloo. I was entered in two competitions, the Mixed Veteran Sabre (over 40) and Senior Men's Sabre (all ages).

My friend, Chacho, and I drove down together. The car was a little heavier coming home.

I found it odd that in the church washroom was a plating showing men gathered around a small table drinking. Strange thing to find in the washroom of a church hall!

But to the fencing.

First up in the morning was the Vets' final. Six matches would determine the champion. I was lucky to have Chacho on the side lines, reminding me to keep my blade out and exploding with my lunges. 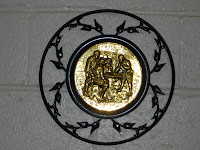 It was a good day, as for once my defense was working as well as my offense. Usually I am not a good defensive fencer. I have great distance and can get my body out of the way of an attack (parry with distance) but usually I have trouble with parries (blocking an attack with my blade) and counterattacks. On this morning everything was working for me as I won all my matches and took the Gold. No inconstancies, no panic moments, no self doubt on my strategy.

In the afternoon i 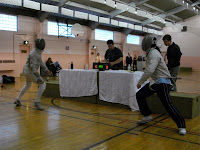 t was the Senior finals. After the poole, I was 3 wins and 4 losses, with a plus minus of just minus three. I am capable in that field of being 5-2 but it wasn't meant to be. Chacho smoked me, risking his ride home, but I have only ever beat him once. I lost to William, in a match I just fenced badly and lost 5-3 to Brian, another I should have beat.

In the DE (Direct Elimination), I came up once again against Brian. It was a hard fought match with me leading throughout. In a match that goes to 15, I was up 13-11 but Brian fought back to take a 14-13 lead. next point he attacked and I made him miss, and proceeded to back him down the strip, attack and take the point. 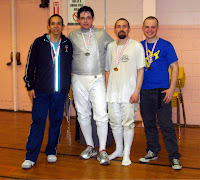 Dan, the judge, said it was the ugliest 14-14 point he ever saw. I agree. I knew Brian was coming for me and should have stepped in and quickly back making him miss. Instead, I tried to do a simultaneous hit on him (we strike at the same time with no points given) and our blades clashed, we bumped into each other with his blade touching my vest for a point and my guard striking his mask like a punch.

His point, his win, and a yellow warning card against me to end the day.

It was a fun match, though, and I ended 10th out of 16. His girlfriend came to me a few minutes later to say th 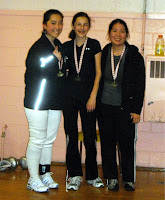 at I had exhausted him during the match. When he fenced Chacho, his tiredness showed and went down to defeat.

In the woman's event, my friend Kristina (pictured left) took the Gold and Wendy, a friend of mine who moved to New Brunswick, and came back for a visit ... and to fence to Bronze.

All in all, a great day. I lost gas mileage on the way back as the car was heavier from Chacho and I each hauling home Gold. Didn't I say it was a great day?

Here is a short video of the best point I made all day!

Hey, I didn't actually give you the yellow card at the end...There was one earlier for crossing though, if I recall! :P

Nice fencing though Gord, things look to be coming along well!

The crossover was in an earlier match in the Vets. I thought you gave me one for that too. Figure one yellow for each tourney would give me consistency.