"The Rocky Horror Show" at the Lower Ossington Theater 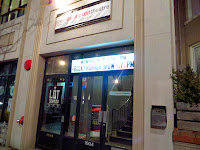 Teena and I have seen a couple of productions of the Rocky Horror Show and when we found out it was playing at the Lower Ossington Theater, just a ten minute walk away, we bought tickets.

For some reason, both of us thought that the theater was made up of actors in their young teens but with this play we knew different. The theater does put on family shows, maybe that's where we got the idea.

The Rocky Horror Show is anything but a kids' show ... especially this production!

The theater is quite intimate, seating 150. There is another smaller theater there too which holds 80. The small close venue added to the atmosphere of the show.

It was a great production, the best that I have seen. There was no shyness with the cast as the entire cast was always, grabbing, groping, feeling and fondling each other. Girls with boys, boys with girls, girls with girls, and boys with boy, the cast with the audience! It was a much raunchier version than I have ever seen and it was great!

I thought Adam Norrad played a great Frank N. Furter. Talk about interacting with the audience ... he ran up into the seats and passed out across the woman beside me and me. He felt like he was going to roll off so I kept a tight hold of his jacket. The woman beside me, who obviously knew the cast, kept hold of his crotch.

The audience was right into it yelling lines.  The cast was great at feeding off them and doing some hilarious alibiing.

There was a great amount of energy in this production. I loved their version of Time Warp, always my favorite song from the play. The play does hinge on Frank N. Furter's entrance his song, Sweet Transvestite, and Norrad really sold it!

Although the cast are basically starting their careers, there was a lot of great talent on the stage. Amanda Milligan was great as Janet, I really enjoyed how Meghan Allen portrayed the Narrator, and Bianca Heuvelmans could really sing. There was one point where she held a high not for at least over a minute, possibly two. It was astounding.

Oh, one slightly embarrassing  moment. At intermission, Teena headed for the bathroom and I hit the bar to get a couple of wines for us. I opened my wallet ... and it was empty and a cash only bar. I was out with people from work last night and forgot to make a run to the bank today. So I stepped aside and waited for Teena to come to the rescue.

Thanks for the wine, Teena!

I had a lot of fun, loved the caliber of the production and can see us going back to see more production there.
Posted by Swordsman at 22:00