John Cleese, "Last Time to See Me Before I Die" at the Winter Garden Theatre 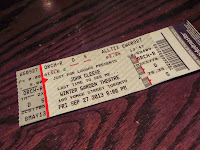 Last May when I heard that John Cleese was coming to Toronto on his Last Chance to See Me Before I Die tour, I knew I would be there. Teena wanted to go too so I ordered up tickets right away.

Well, tonight was the night I had been waiting 4 months for. My chance to see live, a person who I believe is one of the great comedic minds of my time.

My worry was that he might be flat, unfunny, and maybe just a shadow of what he once was. That was all for naught. He was as brilliant as ever!

The Winter Garden Theater was the perfect place for this type of show. It was just Cleese up on stage telling the story of his life, showing clips of some of his work and telling stories about people he has worked with, especially the Pythons. No skits, no trying to re-enact his silly walk, just story telling. 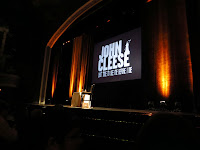 The show started just after eight and ended just after ten with a twenty minute intermission in between...and it was all a lot of fun.

Cleese is a great story teller and the clips he shows never break the flow of the show. Most in the audience could mouth the lines of most of the clips, but Cleese showed clips from his pre-Python time and they were quiet funny.

Back in the early 70s, Monty Python Live came to Toronto and I couldn't go. It was a huge disappointment for me. At least I finally got to see my favorite Python, John Cleese, live and in action on the stage.

It was a fun, enjoyable night with a brilliant comedic mind! 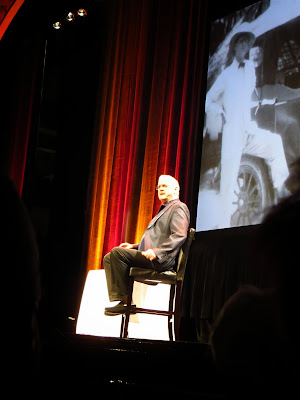