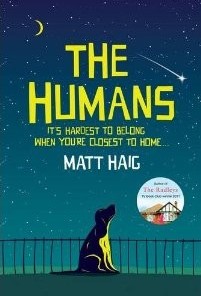 This is a very difficult review to write as The Humans is one of the best books that I have ever read and want to do it justice. Perhaps the best way to start is to use author Matt Haigs own words from his website.

This is the book I am most proud of. I have never written anything like it and probably never will again. I have no idea if you will like it. I really hope you do.

I am a nervous wreck about this one. I don’t really know why. Well, I do. Because it is personal. I put absolutely everything I had into it so if people don’t like it then they don’t like me, because all the best things I have to offer the world are inside its pages.

I don’t want to tell you it is a book that features an alien in it, because you might not like books with aliens in it, and I don’t really. It is a love story and a murder story and a what-are-we-here-for? story. It is about humans. That is why I came up with the title. The Humans. See?

On Goodreads, I gave it a five out of five and that is so rare for me. 87 reviews on that site give it an average of 4.14 out of 5 and being that high with so many reviews is rare.

“I was not Professor Andrew Martin. That is the first thing I should say. He was just a role. A disguise. Someone I needed to be in order to complete a task.”

The narrator of this tale is no ordinary human—in fact, he’s not human at all. Before he was sent away from the distant planet he calls home, precision and perfection governed his life. He lived in a utopian society where mathematics transformed a people, creating limitless knowledge and immortality.

But all of this is suddenly threatened when an earthly being opens the doorway to the same technology that the alien planet possesses. Cambridge University professor Andrew Martin cracks the Reimann Hypothesis and unknowingly puts himself and his family in grave danger when the narrator is sent to Earth to erase all evidence of the solution and kill anyone who has seen the proof. The only catch: the alien has no idea what he’s up against.

This book has not only a great story but great developing characters. I found myself becoming involved with all of them, Professor Andrew Martin, or the alien who has taken over his body, Andrew's wife Isobel, their son Gulliver, and even, or especially their dog Newton, who graces the books cover.


The Humans is at the same time humorous, dramatic, insightful, thoughtful and thought provoking. It's about murder, math (especially prime numbers ), poetry, death, love, and the world we live in.

Matt Haig has wanted to write this book since he came down with some personal problems in 2000, but it took five books and a dozen years before he could. I'm glad he waited as he sure got it right!

To say more would be to give too much to give away. Just read the book! I can see myself reading this one again!
Posted by Swordsman at 19:34

Not my kind of book but I'll give it a try.