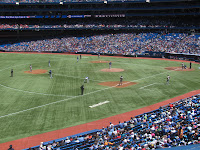 Ken and I are both busy on the weekend so we thought having lunch, then spending a Wednesday afternoon at the ballpark watching the Jays play would be a great way to spend an early Fathers Day together.

First we had lunch at the Loose Moose, formally known as Armadillos, then it was off to the game.

As much as we were hoping for a Blue Jays victory, we also were looking forward to seeing the Washington Nationals' Stephen Strasburg pitch. He has been known to hit 100 mph on the radar gun and is 7-1 on the season. Drabek was on the mound for the Blue Jays and I was hoping for a win for him.

But is was not to be.

The Nationals took a 2-0 lead which was erased with a Jose Bautista two-run home in the bottom of the third. The problem was the very next inning, the Nationals put a couple more on the board. The Jays were really never in it for the rest of the game, losing 6-2

Bad point of the afternoon ... the Jays lost.

Good things on the afternoon ... spending the afternoon with Ken ... perfect weather for a ball game ...  Bautista's 19th home run of the year ... some great Blue Jay's defensive plays ... not being at work. 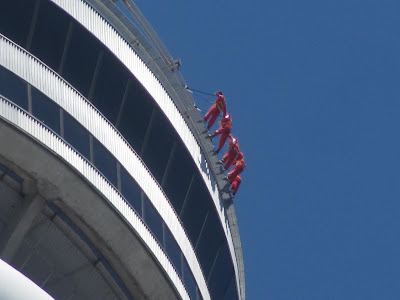