Touring the Rogers Centre, Home of the Toronto Blue Jays 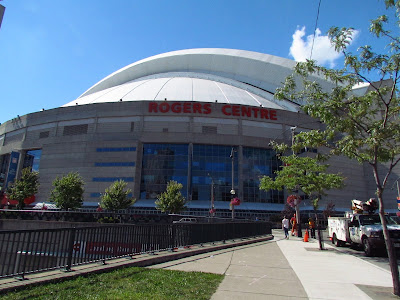 The Rogers Centre, formally the Skydome, home of the Toronto Blue Jays opened in 1989 and I'm proud to say that I had Blue Jay tickets for the second ever Blue Jay game in the dome. Funny that I have not done a  tour of the stadium in the 24 years it has been open. Today Teena and I did just that.

Outside the Rogers Centre stands a statue of Ted Rogers, founder of Rogers Communications and the man who bought the Jays in 2000 and the Skydome in 2004. At the time, it was possible that the team could be sold and moved to the U.S. but Rogers spared us that. For that reason, I am glad he has a statue here. 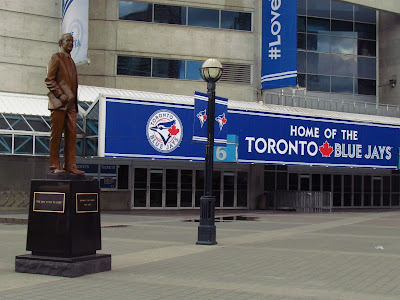 Before going in, we saw people doing the Edgewalk on the CN Tower and doing the lean out over the edge. Notice the bums hanging over on the right side of the second photo then the closeup! Teena and I have decided a long time ago that we would not be doing this! 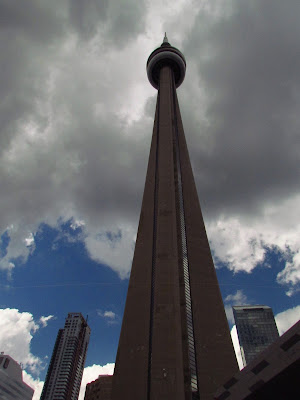 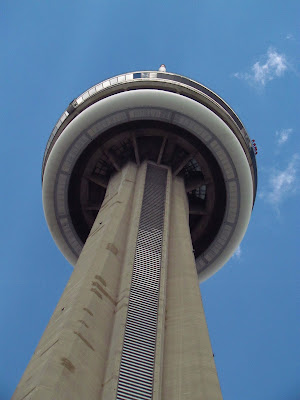 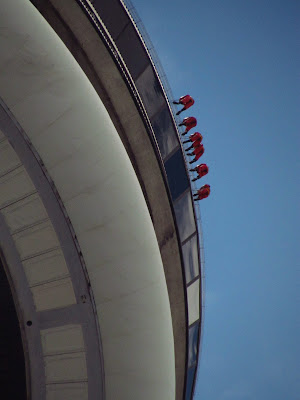 It was great wandering the Rogers Centre when it is empty. It is quite eerie yet peaceful compared to any other time I have been there which is always game day. 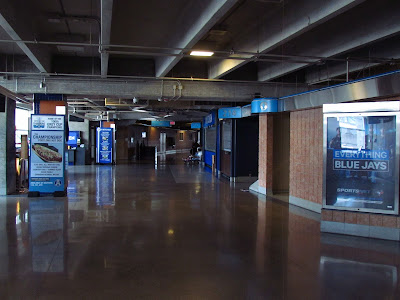 I had hoped to stand on the field but today we couldn't as the grounds crew was changing over the field from a football setup to a baseball field. 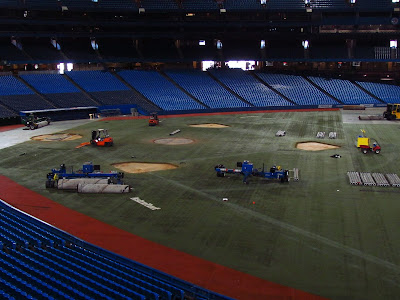 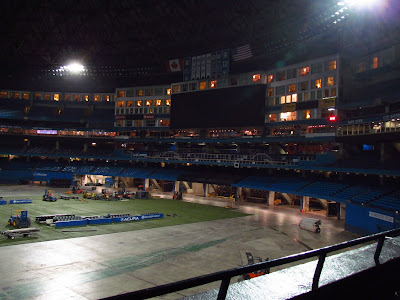 Look at this wrinkle in the AstroTurf by home plate! 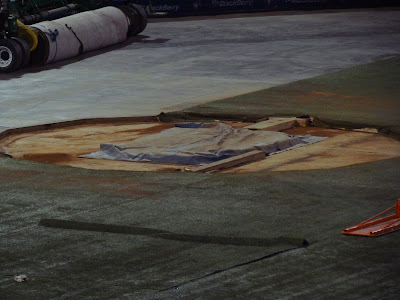 It is soon ironed out by a worker with a stretcher plus the flattening machine in orange. 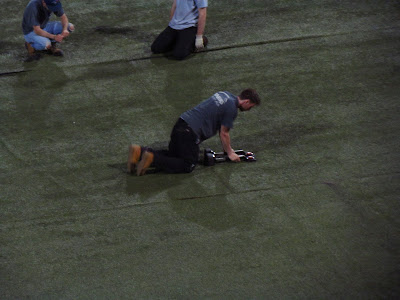 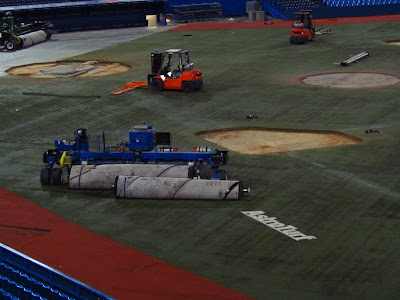 The Astroturf is not very thick but is sprinkled with lots of plastic pellets so the players can slide like they would on grass. 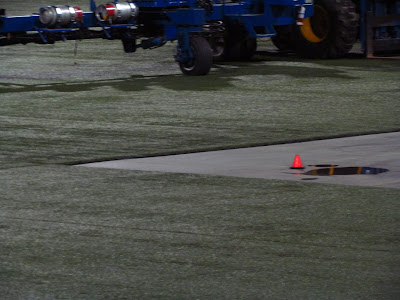 The pitching mound is underground and when not in use is securely covered with steel plating. When it is needed, the slates are removed. Then underneath the mound the compartment is flooded with water and the mound floats to the surface and is locked into place. We saw the plating being removed but not the pitching mound being raised. Damn! 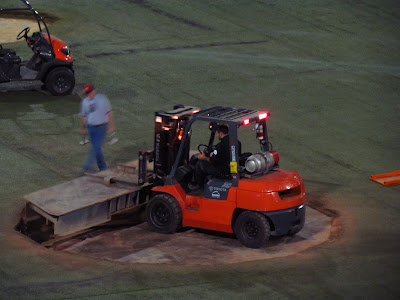 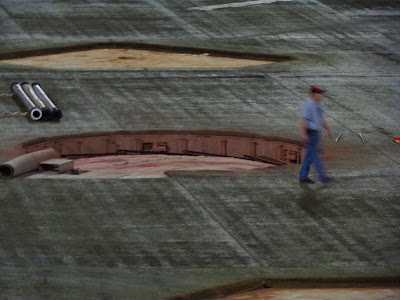 We were let into the press box. It was very cool, right behind home plate. At one time, many decades ago as a teenager,  I wanted to be a sportswriter. After seeing this, maybe I should have pursued it. 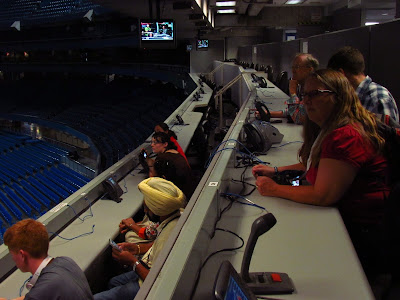 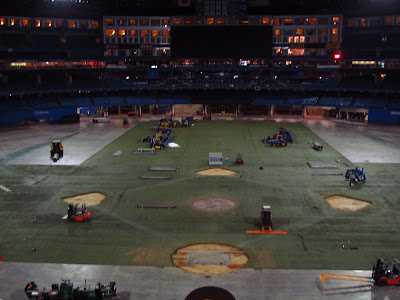 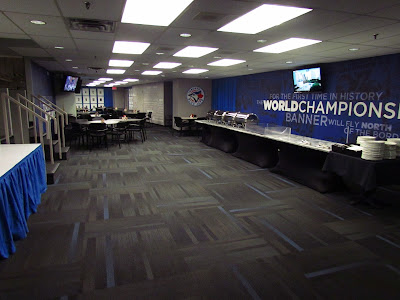 The press room has framed press guides for every season. My two favorites?  The year we clinched our first playoff berth in 1985 (this is the 1986 press guide) and the 2006 press guide commemorating Tom Cheek, who broadcasted every Blue Jays game on radio from inception in 1977 to June 2004. 4,306 games! 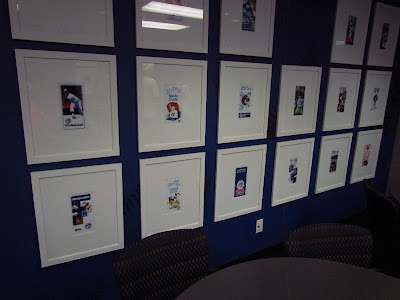 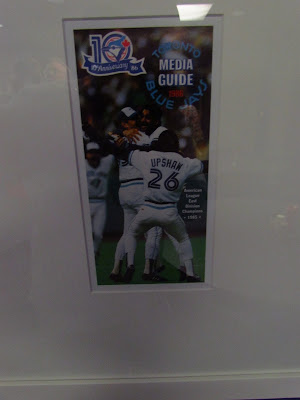 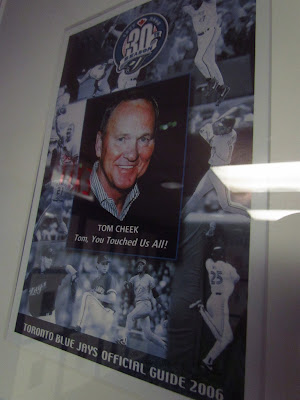 We then went into a luxury suite which was cool, although I have been lucky enough to have been in these a few times. Too few really, as they are great!

We went down to field level. Although most tours go onto the field, we could not as the grounds crew, as mentioned earlier, were at work. This was so much better to watch as we got to see the work being done up close.

The rolls are numbered so the crews know where they go and are stored under the north stands. 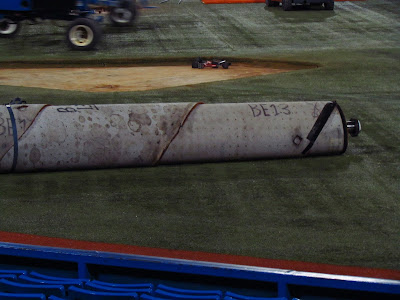 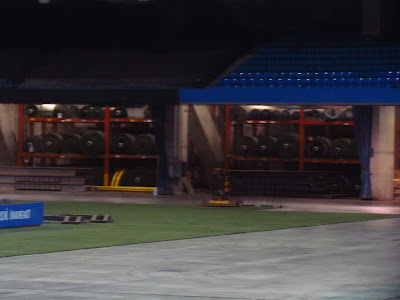 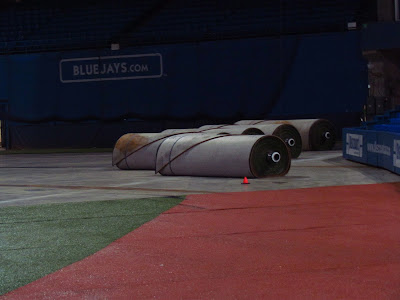 I always wondered how deep the dirt was around the bases. From what I saw it looks like it is at least six inches or more below the surface. 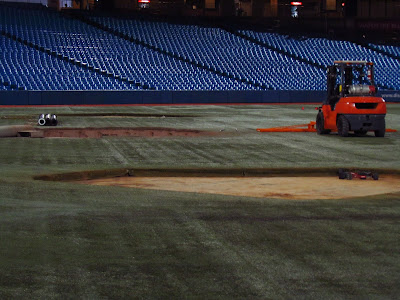 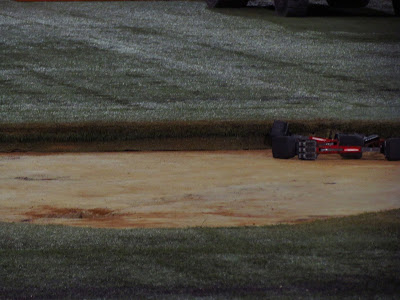 Jasmine, in blue, was our guide and was excellent!. She gave us so many facts, was fun, took pictures of us, and there was not a question she could not answer. She loves her job and it shows. Oh, and one of many facts she imparted. How mach toilet paper is used in the Rogers Centre in one year? Enough to go all the way to the moon! 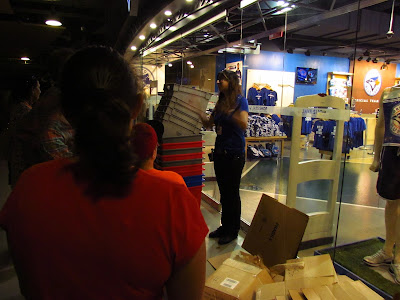 Here we are at field level and of course Jasmine took the shot. Great shot Jasmine! Thanks! 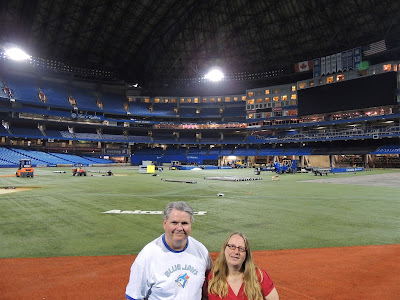 This is an excellent tour that I would definitely recommend!
Posted by Swordsman at 15:00