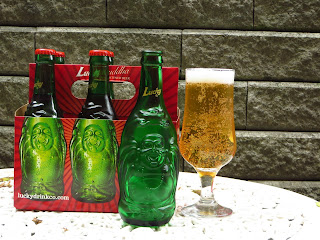 Sometimes a good name and fancy packaging can sell a product but this week's Beer of the Week, Lucky Buddha Enlightened Beer, uses religion in both as a selling point.

The beer is not only named after a religious figure but the bottom of the bottle is in the shape of Buddha hold a gold ingot over it's head.

Now I find this a little odd.

I do know that if a beer company were to make their bottle in the shape of Jesus or Muhammad, there would be howls of protest, demonstrations outside of their breweries and lawsuits demanding the beer be pulled of store shelves, but Buddhists don't seem to mind. This beer has been on the market since 2005.

Maybe the religion has a bit of a sense of humour about itself or do they just promote their beliefs through any method possible? Better than knocking on my door to sell your religion for sure! 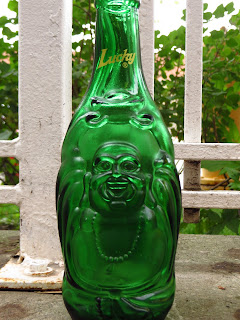 Created to put a smile on your face!

In a world a world that's full of change, it's good to know that Lucky Beer offers something consistently good natured. Although the distinctive laughing Buddha bottle is central to our brand, Lucky Beer - and the good fortune it shares - transcends all religions, cultural boundaries and beliefs.

In its simplest form, we stand for goodwill for all humanity.

"If you think that enlightenment is separate from the drinking of beer you have not yet understood" Ancient Taoist Saying.

Lucky Buddha is brewed by Hangzhou Qiandaohu Beer Company which is located in the town of Qiandaohu, China. The beer itself though is brewed and bottled at Thousand Island Lake, which is about three and a half hour drive south-east of Qiandaohu. 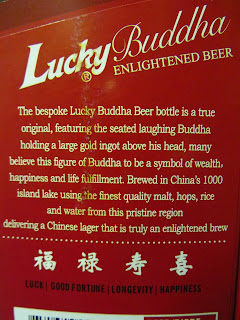 The beer pours a very light golden colour with a white head that dissipates quite quickly. There is a sourness in the aroma that I did not expect plus a hint of hops. As rice has been added to the malt, there are no lacings left on the glass.

This is a very light tasting beer, much lighter than expected with it's 4.8% APV. I am not a big fan of rice being added to a beer but realize that there is an abundance of rice in China and that Asian lagers feature rice. It is a taste that is appreciated in the Japan, China and Asia, but one that I don't particularly enjoy.

For me, it is a passable light tasting lager. Many would enjoy it. Me ... not so much. Still, it won't be a hardship to drink those other five beers that are left.

Labels: Beer of the week, China