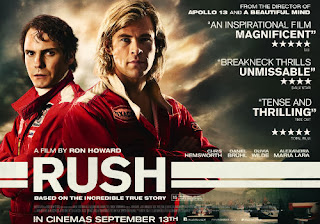 As exciting and dramatic as racing can be, there have only been a handful of good movies done about the sport. Le Mans with Steve McQueen, Grand Prix with James Garner was good but a little dated, and The Last American Hero with Jeff Bridges come to mind. IMDB lists Senna as the number one racing movie. I haven't yet seen it but it's on my list.

Tonight I saw Rush with Chris Hemsworth as James Hunt and Daniel Bruhl as Niki Lauda.

Set against the sexy, glamorous golden age of Formula 1 racing in the 1970s, the film is based on the true story of a great sporting rivalry between handsome English playboy James Hunt (Hemsworth), and his methodical, brilliant opponent, Austrian driver Niki Lauda (Bruhl). The story follows their distinctly different personal styles on and off the track, their loves and the astonishing 1976 season in which both drivers were willing to risk everything to become world champion in a sport with no margin for error: if you make a mistake, you die.

I would put Rush at the top of the list for racing movies but the film has much more depth than just following the 1976 Formula One championship race. Much of the movie takes place behind the scenes, showing their private lives and their rivalry off the track.

Hemsworth was great as Hunt, but even better and deserving an Oscar nod was Daniel Bruhl as the humourless, dedicated, all work, no fun Lauda. It is his role that undergoes the most character development during the movie. Hunt and Lauda were definitely two polar opposites and Ron Howard captures that wonderfully.

Howard also does a fantastic job is highlighting the speed and danger of racing. Some angles in which he shoots the action are not what you expect and really help with the action.

The real Hunt and Lauda from back in the day! 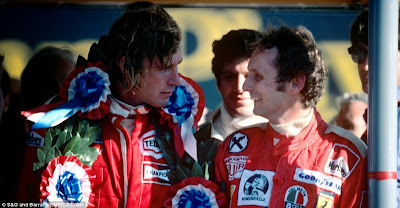 Good review. A bunch of fun, but also very emotionally compelling as well mainly because you care for both characters, pretty equally.