The 2013 Toronto Festival of Beer 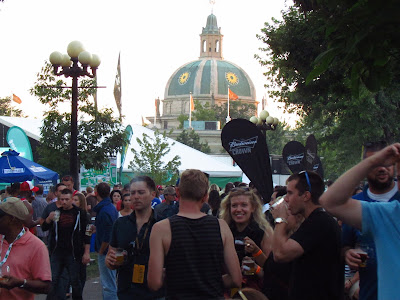 Teena and I received media passes for this weekend's Toronto Festival of Beer.

We were there last year on a Thursday night for the Queer Beer Festival which kicked off the weekend which was a lot of fun, although it is not part of this year's festival.

We worked today so although the festival started at 4:30pm, we didn't arrive 'til 6pm and already the place was full. 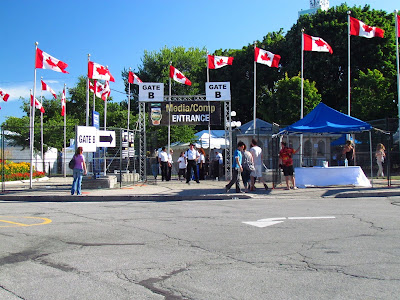 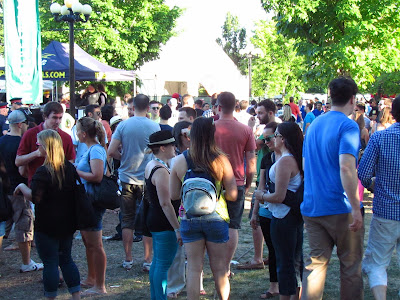 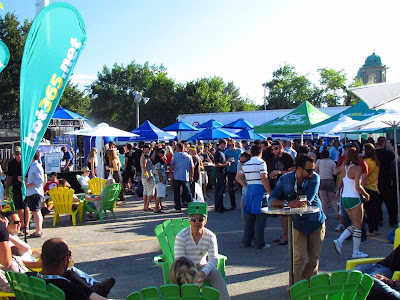 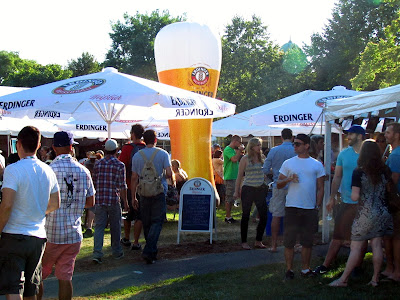 I was worried when I found out that tonight was sold out. Would it be too crowded, would the lines be too long for beer?

This is a very well-organized event and I never felt crowded or felt a beer line was too long. Our first stop was at the media tent where we received our passes and two complimentary drinks from Goose Island Brewery from Chicago. 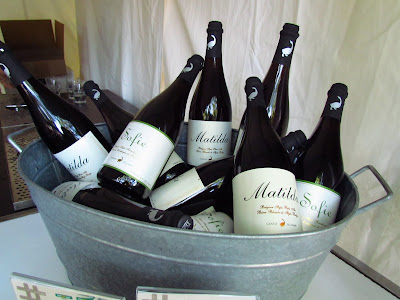 The first beer we had was called Sofia, aged in wine barrels. The beer was very light tasting, had white wine in the aroma and taste. It was very nice! Surprisingly I liked it more than  their more hoppy beer, Matilda, and would definitely buy it for home 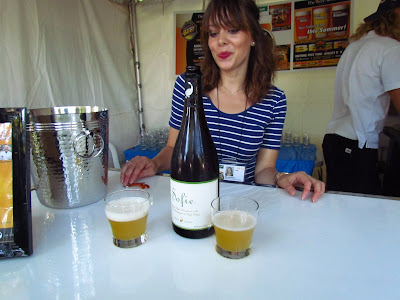 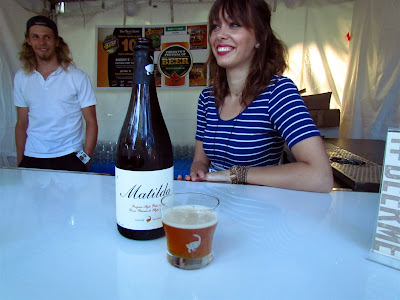 Here we are at the media tent. 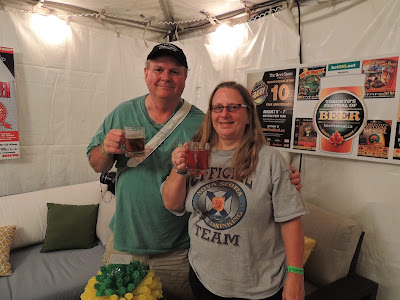 The first beer for the evening was a Maiseis Weisse from the same brewers as Duvel, a beer that I really love. It was a great way to start the night. 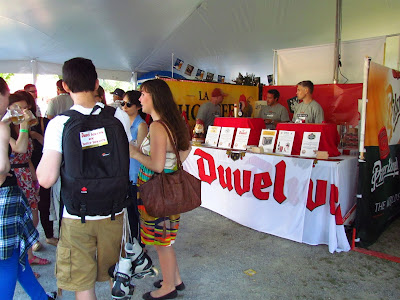 Each year the festival profiles a region of our country. This year it was the west coast and one of my most favorite IPAs, Red Racer. Teena and I had an opportunity to meet Tim, the head of sales from Central City Brewery, who was a fun guy to talk to. Yes, I have Red racer in my glass! 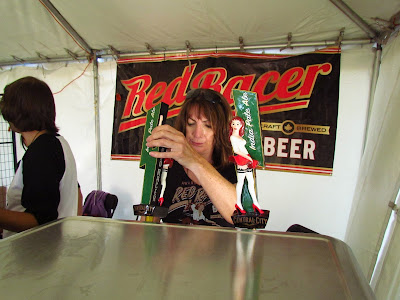 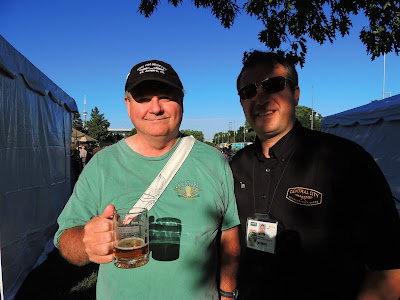 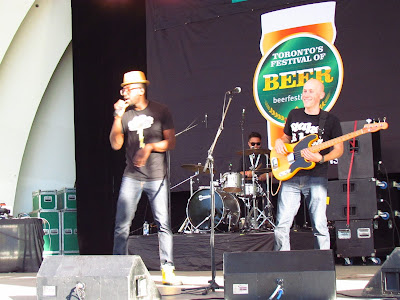 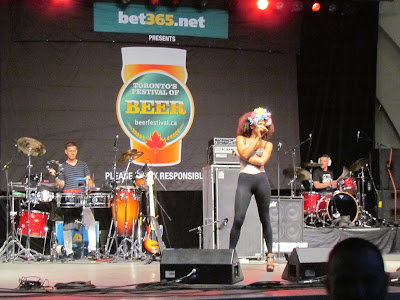 ... and, of course, beer. This server from Flying Monkeys Brewery was moving so fast to keep up that she was a blur! Their Citricas was fabulous! 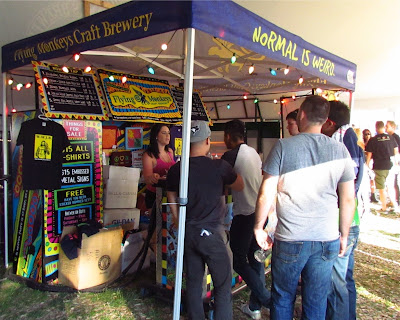 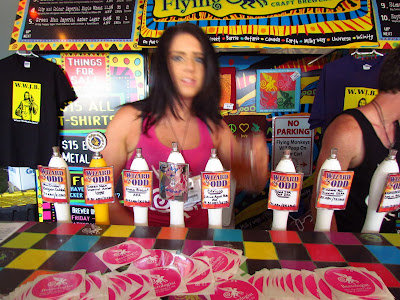 We wandered into the Moosehead beer tent and I found a very favorable Boundary Pale Ale. Moosehead is now the largest Canadian brewer. 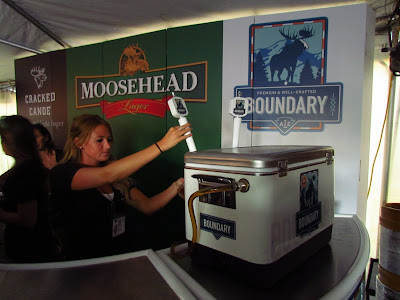 Black Oak Brewery is one of my most favorite breweries!. I love their Pale Ale, their Summer Saison, my favorite of all saisons I have tried and, of course, the 10 Bitter years, which I closed the night with. 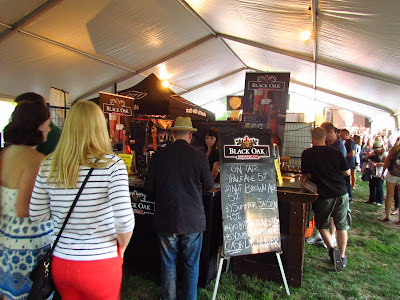 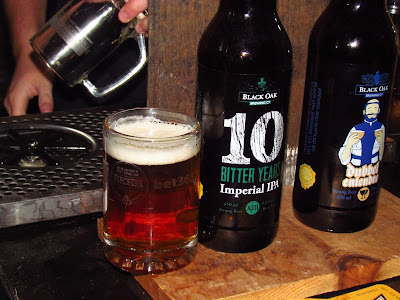 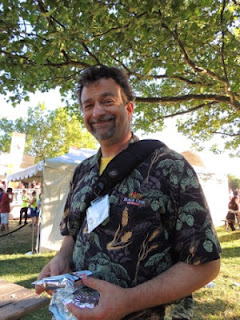 Left Field Brewery has a 6-4-3 IPA which I really enjoy. They also have a place to get your Rookie Baseball Card shot. I love the guy goofing behind me! 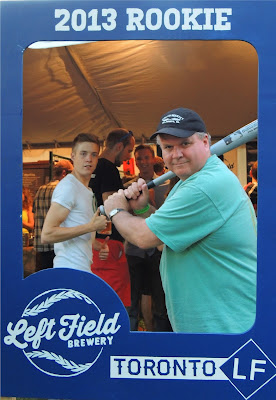 I really like beef jerky but find it expensive. These were just $5 a bag, which of course I bought, plus we were given free samples around the grounds. It's good jerky! 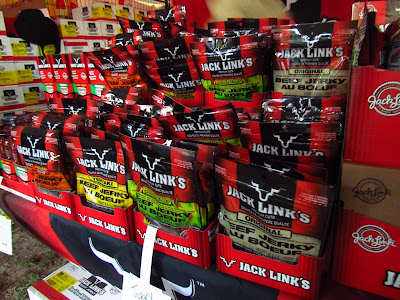 This is a really enjoyable beerfest and has something for everybody. It is well-organized, fun and full of people without being over crowded, and has the big beer brewers along with the craft brewers which I love!

I had a great time tonight and am looking forward to next year.
Posted by Swordsman at 23:00

Noticed you are off to a Marlie game on Tuesday…
If your looking for some great beer after or before the game we have a Wellington Tap Takeover at The Grapefruit Moon
Pints $5 all day. Hope you can come by and celebrate with us!