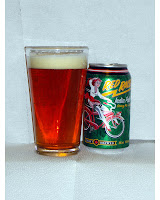 Last week Teena went to Vancouver for work and stayed over to see a friend.

While she was there, she hit the BC Liquor Store to pick up some BC craft beer which I cannot get here. When she asked me if there were any particular beers she should be on the lookout for, I quickly answered Red Racer IPA.

I had heard that this is a West Coast style IPA, which I love. Second, I could have ordered it privately through the Bar Towel website at $75 for 24 cans, depending on the freight charge, which is way too much, but found there is an excellent buzz on this website about this beer. Third, it won Gold for Best BC Beer at the 2010 CAMRA Vancouver Awards.

So I was delighted when Teena got back, opened her suitcase and pulled out a six pack of this along with some other beers.

Central City Brewing has been in operation in Surrey, BC, for over 5 years and has won other CAMRA awards for its Red Racer IPA and also this year for Best Local Brewpub. Knowing that, if I ever get to Vancouver again, this is a brewpub I would love to hit.

its Red Racer Beer which makes me shake my head. It seems there is a brewery in California, Bear City Brewing Co., which is suing Central City over a trademark infringement. Bear City makes 2 beers, Racer 5 IPA and Red Rocket Ale, and claim that Red Racer is causing confusion with their name and labelling. Below are images of each.

I like Central City Brewing Brewmaster, Gary Lohin's comments on this. "First of all, our logo is not a mish-mash of Racer 5 and Red Rocket. The logo was used with permission from a local elderly painter, who painted this oil painting in the 50s. That’s why the girl kind of looks like a Vargas/pin-up girl ... I myself enjoy Bear Republic’s beers, and the most ironic thing is that we were selling their beers in our brewpub store! We never had a problem confusing their label with ours ... We want to spend our money on new tanks, and kegs, and our employees, not give it to lawyers."

Here, here! Maybe the TTC should sue Bear City Brewing for the use of the name Red Rocket, which the TTC uses to market their transit system. Toronto's subway and streetcars are know as the Red Rocket and the TTC campaign slogan is "Ride the Rocket".

Enough nonsense! It's time to crack one open.

The beer pours a light copper colour, kind of a reddish brown. The head which does stay well (I guess I rinsed the glass properly) and is not pure white but has a slight tan colour to it. There is a strong floral hop presence in the aroma, and I am very ready to take a sip. 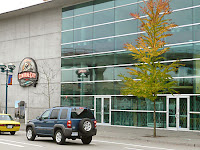 There is a slight bitterness on the first sip, a hoppy bitterness which builds and lasts through a very long West Coast hoppy finish. This is a very strong flavoured West Coast style IPA. Indian Pale Ales are my favourite and this Central City nailed this one.

Teena, thanks so much for picking this up for me and hauling them home in such a heavy suitcase. You Do Rock!

I had great anticipation for this beer and was not disappointed.

Well, there is one disappointment. I can’t get this at the LCBO in Ontario. We do have a friend, Leanne, coming in the fall to visit us from Vancouver. Hmmmm.

Say Leanne! Have I told you how nice you look today?
Posted by Swordsman at 18:30