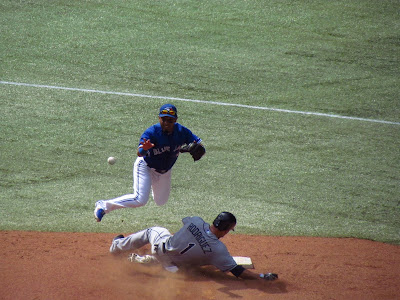 Before telling about the sad events of this afternoon, let me say that I have always wanted to take a take a picture of the Jays making a leaping double play ... and there it is above. In the eighth inning and two men on, the Jays needed a double play and got it, shortstop to second to first. Here is Izturus leaping over the sliding Sean Rodriguez to make the out at first.

Now to the game. 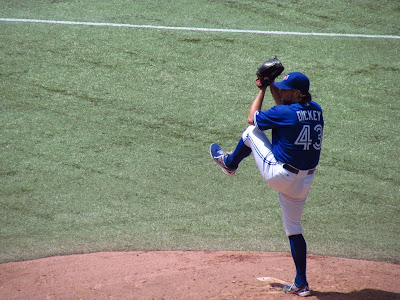 R.A. Dickey, his high kick and knuckleball went to work early and pitched five and a third great innings of baseball, giving up just one home run and striking out seven (the seventh strikeout brought up a great cheer as tomorrow everyone with a ticket will get a free slice of pizza from Pizza Pizza).

Here is Dickey's first pitch of the game. 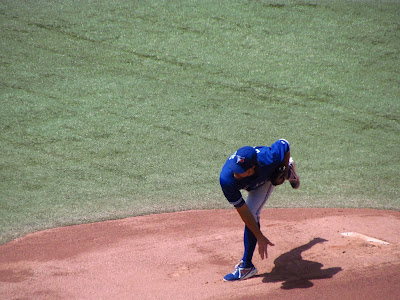 Early in the game Colby Rasmus broke up a double play that would have ended the inning. That allowed the Jays to score their first run of the game and take a one to nothing lead. 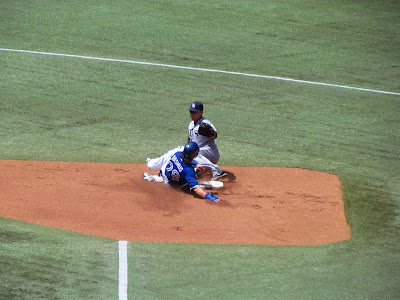 The game was tied one all going into the fifth and Dickey struck out Evan Longoria, the Rays hard hitting third baseman. Then the roof fell in. After a James Loney single, Luke Scott, with a three and two count on him and the fans chanting and cheering for a strikout, sent a long two run home run to right field. Then the very next pitch ex-Blue Jay Kelly Johnson sent the ball into the second deck in right field to give the Rays a four run lead.

The Jays could get baserunners but they could not score them.

Bautista with a big swing and miss. 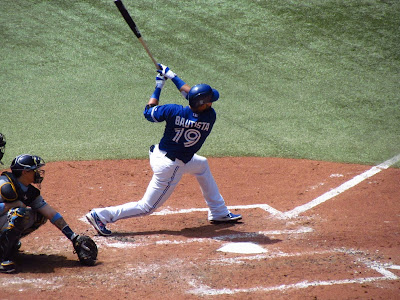 Adam Lind takes a ball. He struck out a few pitches later. 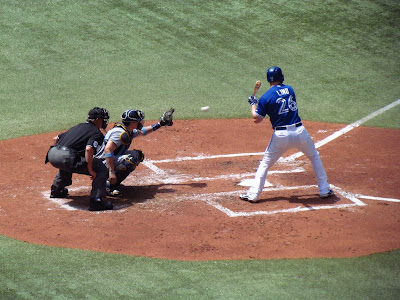 Edwin Encarnacion fouls one off.  He went hitless in five at bat. 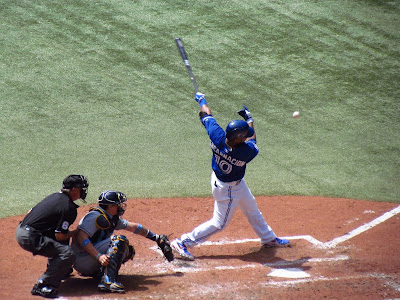 A scary moment. Jose Reyes was on first and looked to be hit in the ribs by a pitch out to first. When I got home and saw the replay, it looked like he was hit in the stomach...or a more senstive and painful area. He was in pain, but was still able to play. In fact, in the bottom of the ninth he doubled and drove in two runs, then dove head first into third on an Encarnacion ground out. 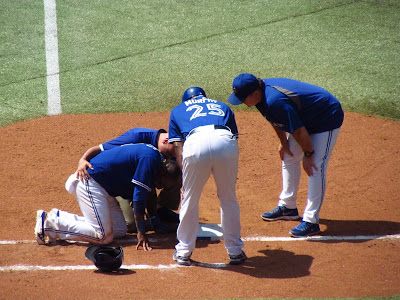 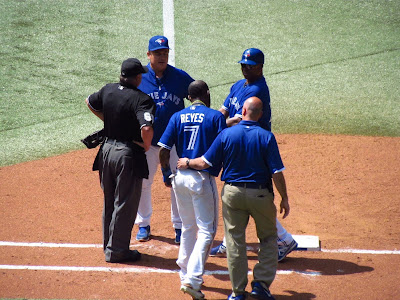 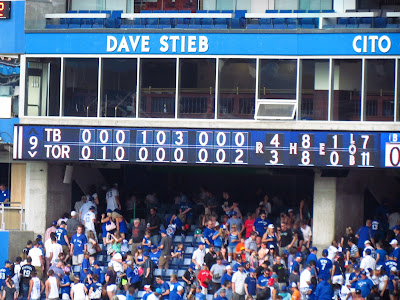 Once again the Jays lose and left 11 men on base in the process. This happened all weekend long.

This team should be much better than this. They don't seem to be playing inspired baseball. In situations where a single is enough to bring in a needed run, they swing for the fences.

I think Gibbons' time is done. Time for a change in managers. This is a team that should be doing much more than it has been and I think Gibbons is pretty much not managing. Although he drew a walk, why when your club is down by three runs in the ninth let a player with a .171 average come to bat?

I think a managerial change might electrify the club. Couldn't hurt looking at a team that was odds on favorite to go to the World Series, now limping along with a 45 - 52 record. 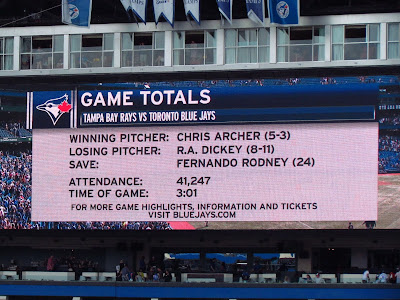