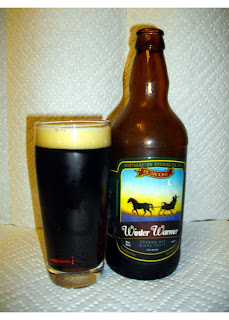 In my post about Yippee IPA, I had mentioned how a couple of months ago, I had asked Jim and Wendy to bring me some Yippee IPA up from Fredericton for me to try. They did this and, knowing how much I love trying new beers, also brought me six of Picaroons Winter Warmer.

Picaroons Traditional Ales, also know as the Northampton Brewing Company Ltd., is located in Fredericton, New Brunswick. It opened in 1995 and is doing well, selling everything that they brew and selling only in New Brunswick. The pictures of the staff on the website is humorous as even Hamish, the brewery dog (shown below to the right) is listed as staff. Wonder if he gets a T4 at the end of the year.

Picaroons website says that "This strong ale is our interpretation of a classic English barley wine." Barley wine, according to The Beer Hunter website, is "An English term for an extra-strong ale (implied to be as potent as wine). Usually more than 6 percent by volume and classically closer to 11." This Winter Warmer has an alcohol content of 7.5%, which definitely makes it a beer to sip slowly, rather than gulp.

The beer pours a very dark brown colour, with a nice brownish head and leaves nice lacings on the side of the glass when sipped. Many winter seasonals are spiced but this is not. There is a strong, excellent, roasted malty taste to this, which reminded me more of a porter than an ale. My wife, Teena, tried it and felt there was a celery taste to it. I thought it hinted at bitter chocolate. In taste, there is no right or wrong answers, only opinions.

As the ale sat and warmed, the flavours became fuller, smoother and more pronounced. The Winter Warmer is definitely a style that needs to be sipped at warmer temperatures than regular chilled beer. A very nice ale to be enjoyed on a cold winter night.

Thanks Jim! Thanks Wendy! The Winter Warmer was a nice surprise. I'm going to enjoy all six!
Posted by Swordsman at 15:17