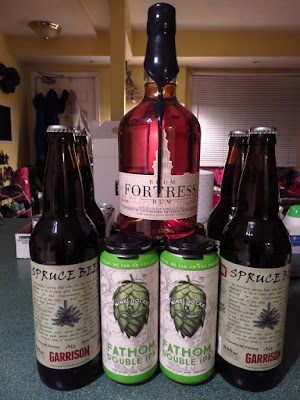 Teena just returned from a business trip to Halifax, Nova Scotia. Whenever she travels, she tries to bring me home some different beers. She did so again today with a bonus bottle of Fortress Rum, which is Caribbean rum aged in oak barrels at the Fortress of Louisbourg National Historic Site. We've had it before and it's delicious.

Garrison Brewery in Halifax brews a seasonal spruce beer that I really love but is not available in Ontario, so Teena hauled home 4 big 650 ml bottles of it. It was my Beer of the Week back in 2012.

She also brought me a 4 pack of a beer from Nine Locks Brewery in Dartmouth that I haven't tried before, Fathom Double IPA.

Thanks, Honey! I know it was a very heavy load to haul around but I really do appreciate it!
Posted by Swordsman at 20:55