Walking in their Footsteps, The 200th Commemoration of the Battle of York 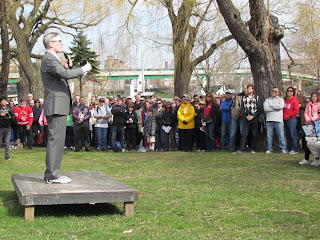 Today is the 200th anniversary of the Battle of York and the City of Toronto did a great job in commemorating the event. The day started on the shores of Lake Ontario with a Sunrise Ceremony:  At 6 a.m. the Mississaugas of the New Credit First Nation will lead four first nations, all descendants of warriors who fought in the Battle of York, in a sunrise ceremony at the Palais Royale patio and fire pit overlooking the shoreline.

It was a little early for me on a Saturday morning but we were there on time when John Moore from 1010 News Talk Radio made the introductions at the site of the landing of the American invasion of York. Tim Hortons was on hand handing out free muffins, cookies and coffee which I feel is such a great corporate community contribution. Thanks Tim's! 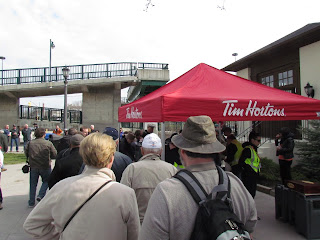 There has always been a lot of conjecture about where exactly the Americans landed that day. I have studied this point during the past couple of weeks and was pleased to find that the walk started with an unveiling of a plaque of the American landing. It was where I thought it would be, just west of the Boulevard Club and up to the legion of The Queens Own Rifles 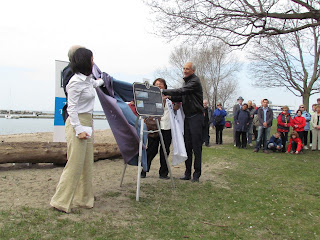 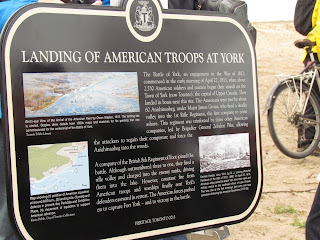 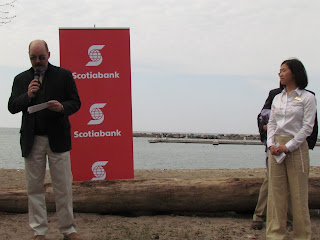 We then moved off to the second stop where Richard Haynes , Site Coordinator for Fort York, told of the story of the fight in this place. There was not a nice beach, like there is now, where the Americans landed. Instead it was a steep ten foot bluff. Native warriors were the first on the scene and and at first succeeded in keeping the first wave of Americans, around 300 from moving up the bluff. The problem was that more and more Americans landed.

The 8th Grenadiers led by Captain Neal McNeal charged into the battle alongside their native allies but were quickly beaten back. There is a lot of landfill that has extended our shorelines. The first picture is where the American invasion would have really have occurred, and the second, the remaining bluff today, which would have been the slope they would have had to have ascended. Richard Haynes, Site Coordinator for Fort York was great in describing the landing 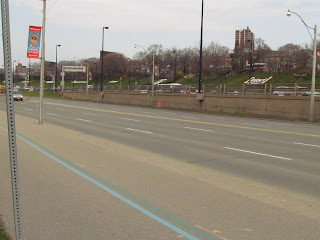 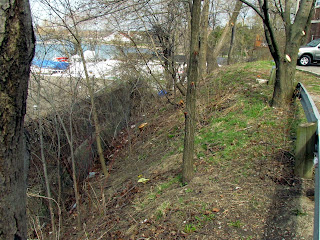 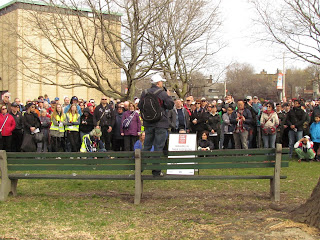 Our crowd grew on on way to the next stop. I joked with Teena , who loves this stuff as much as I do, that there are likely more people on the walk that were defending Toronto 200 years ago. About 200 were at the first stop, and I think doubled at the second and doubled again by the third stop at the old French Fort Rouille.

In 1813 this was a vast clearing and it was here that the most vicious part of the battle took place.

It was well told by Reenactor Richard Feltoe who has written about this battle and others. I have read his Pendulum of War and found it to be an excellent study of this battle and others in 1813.The British forces mad a great stand, hampered by shelling from the ships out on the bay and more and more American troops pouring in. No support came for the defenders and after an hour or more of serious battle had to fall back to what was known as the Western Barttery. 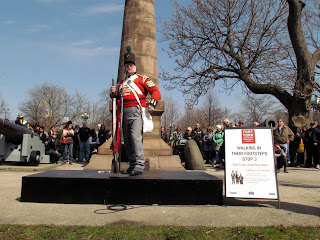 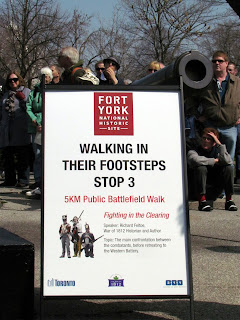 Again there was some dispute as to where the Western Battery was located. A battery is a protected small fort with cannon. It is now known that it was located just inside the Prince's gates are today. Ken Purvis, site coordinator of Montgomery's Inn told us the tragic story. I liked the way these kids were dressed! 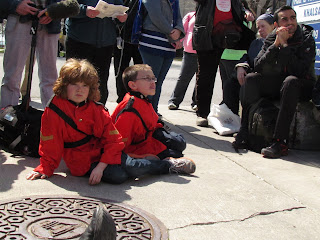 Two cannon were in the battery, previously condemned and now put into action. One fired at the ships in the bay, with some success, and the other fired at the approaching American soldiers. An artilleryman though accidentally placed his lit cannon match into some gunpowder and blew up the battery. Many defenders were killed and the day was basically lost. 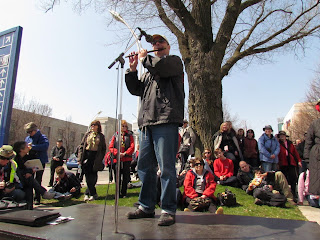 This is a cannon from the Western Battery that day that was being used that day and was part of the blast. It was forged in the 1600's and was considered ancient in1813! 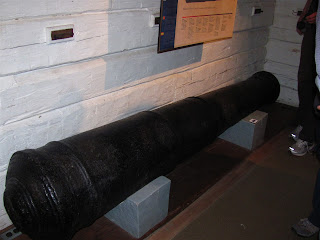 Again the crowd doubled as we marched to our last stop, in the area knows as the commons outside the fort. 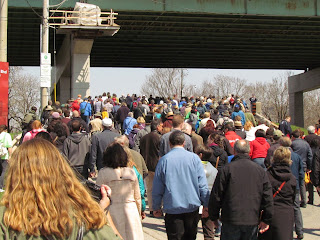 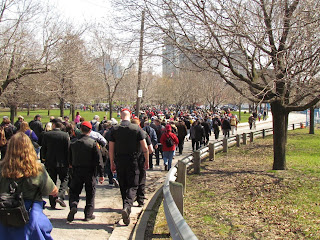 For the final stop, Richard Williamson from Archaeological Services Inc explained the final part of the battle. The explosion of the forts magazine. I have heard him speak before and he is an excellent speaker.

The day was lost and British General Roger Sheaffe told the remaining troops to retreat out of town, and to blow the magazine on the way out. One problem, turns out for the advancing Americans was that the magazine was loaded with extra gunpowder and cannonballs due to be shipped to Lake Erie. The blast was the world's biggest man made blast and rattled windows and walls as far as Niagara on the Lake. It was not until the great Halifax explosion in 1917 that a greater man made blast occurred.

Richard was so good in explaining the effect of the blast. The initial shock-wave blew American soldiers 20 meters back. He showed us a piece of a torched barrel ring that would have been on a barrel in the magazine that was found, 190 years later, 300 meters from the fort. Dozens of Americans were killed by the blast and hundreds wounded. General Pike,who led the assault, later died from a large boulder which crashed down upon him in the explosion. 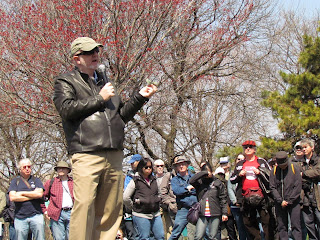 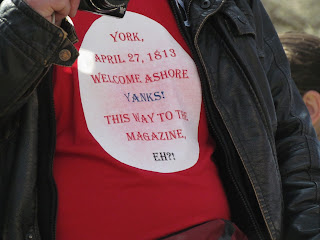 I have done maybe four or five walks of this battle and this one was the best. It was great to see so many Torontonians involved and interested. I know I said this before that there were likely more people on the walk today than defended the town on that fateful day 200 years ago.

I am very proud of that. Our city really does care about our past!
Posted by Swordsman at 19:08