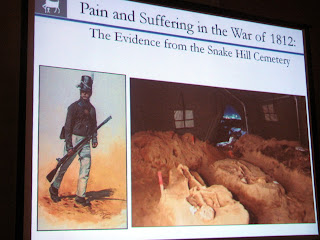 Tonight at the beautiful St Lawrence Hall, Heritage Toronto did their second of three talks on the War of 1812, titled "Pain and Suffering in the War of 1812: The Evidence from the Snake Hill Site".

In 1987 while excavating a property on the edge of Lake Erie to build a house, bones were discovered. The owner went to the police, who said the bones were too old to be of interest to them.

So the owner called a local newspaper. The reporter came in, said he was a collector of old bones and took a couple that had been found and turned them over to the coroner, who told the reporter the same. According to the "Cemetery Act", an investigation had to be made so Dr. Ron Williamson, Chief Archaeologist & Managing Partner, Archaeological Services Inc., was called in.

Dr. Williamson was the one who gave the talk tonight and was an excellent speaker!

When he arrived at the site, he removed the topsoil and found "grave shafts". When a body is buried and the earth is filled back in, it leaves a discolouring of the earth. When archaeologists see this, they know that area is a burial plot.

On unearthing the first body, metal service buttons told Dr. Williamson that this was an American grave site likely from the War of 1812. There was a freelance reporter around who, when he heard, went for the big story and called the Pentagon and, yes, got their attention. The next day the mayor of Fort Erie had one of the top generals and two other high ranking officers in his office.

When Dr. Williamson arrived he was told, "you have the full resources of the US army at your disposal" 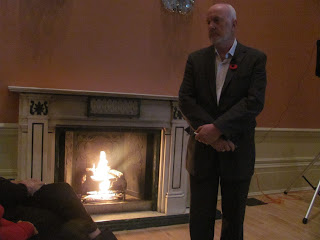 The dig involved his company, the U.S. and Canadian armies, the Smithsonian and the Royal Ontario Museum, plus some Canadian universities.

In all, 31 bodies were uncovered plus 53 fractured bones. Each body was thorough investigated where it laid to determine the injury that caused death and then all bones and buttons were marked and removed for further forensic investigation. A top U.S. army pathologist assisted with this.

One body was found with three hands. Turns out that an amputated hand from someone else had be buried along with the body. Although it was known that amputations was an everyday method used in battlefield injuries, it was the first time an amputated body part from that war had been found. Many more arms and legs were found after.

We saw many pictures of the bodies as they were found. Dr. Williamson reminds us that this 200th anniversary of the War of 1812 is a commemoration of the war and not a celebration. These people died painful, horrible deaths.

The pictures certainly brought the reality of the conflict and the horror of war to the 100 or so people in the room. One had his thigh bone shattered, likely bleeding to death quickly and another it is guessed was hit in his side by a cannonball destroying his right pelvis and lower ribs. Thankfully that would be an instant death.

In the end, 28 of the 31 bodies were proved to be American soldiers. Each body was placed in a flag draped coffin and brought back to the U.S. for burial at Bath National Cemetery, which is a veterans' cemetery in New York States.

The U.S. has always wanted their war dead buried back at home. Dr. Williamson revealed a quote from a dying U..S soldier in the conflict ... "I found Thomas Poe lying on a blanket. He reached his hand to me and told me that he was mortally wounded, that he had just a few moments to live and told me he wanted to be buried on the American side of the river" (July 26, 1814 during the siege of Fort Erie)

And why not send all the bodies? The three left behind may be British and it would be a final insult to them to have them buried in the country they were fighting against and took their life.

It was a fabulously interesting night. Below are a few of the slides we were shown. 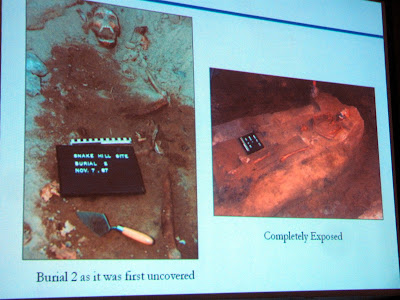 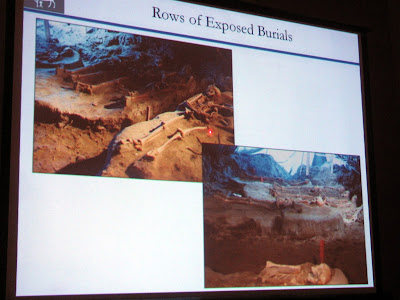 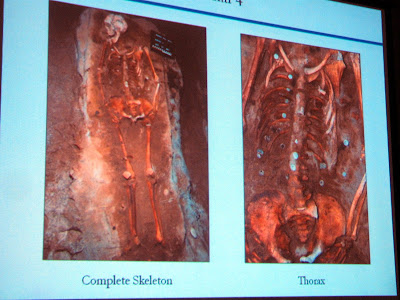 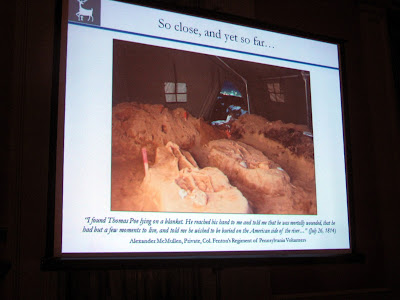 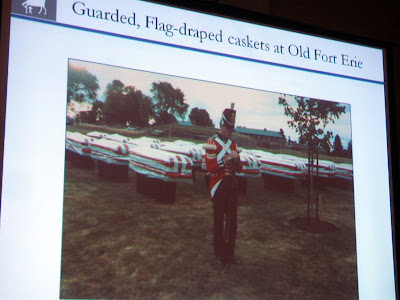 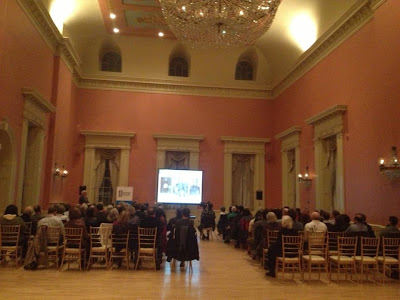 Years ago, we heard Williamson give his first talk on these Snake Hill finds. It was fascinating. I recall the dozen's of hearses taking the American soldiers back to the U.S. over the Peace bridge, apparently to Arlington Cemetery.

When at Arlington in late 2008, none of the Tour Guides had any idea of burial of 1812 soldiers at Arlington. Can anyone tell me if this is true?

These soldiers were buried at Bath National Cemetery, which is a veterans' cemetery in New York State.