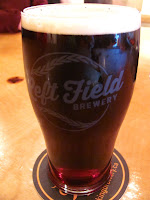 I first heard about a new Toronto brewery,  Left Field Brewery, on the Bar Towel, at the beginning of March but was unsure as to where to try their beer. So far it is only available on tap so I had to find a place that served it.

When I found out this week that it was available at Tequila Bookworm on Queen Street W, it was a perfect location for me.

Well, it's a place that has a real comfortable, relaxing feel about it, they always have a decent line-up of craft beer and the bartenders know their beer, are friendly and look after their customers very well.

Also, it was right around the corner from where I go for massage treatments from Jenn Lloyd, who I have been going to for years and has kept my old body held together despite the abuse I put it through. It was also good that I already had a massage booked with Jenn for Thursday night

A massage, then a couple of beer. Perfect!

Left Field Brewing currently brews their beer under contract with Grand River Brewing in Cambridge but has a long term plan to open a brewery in Toronto. The brewery was opened by Mark Murphy and according to the Left Field website: not satisfied with his past life as a Chartered Accountant, Mark worked his way through 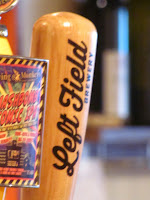 the brewing industry’s farm system, graduating from Niagara College’s inaugural brewing program and instantly signed to Canada’s largest brewery. An avid bobblehead collector and baseball player since his days behind the tee, Mark long dreamt of working with his hands. That’s why he started his own expansion team: Left Field Brewery.

So, feeling great after my massage (special attention was paid to my still healing sprained ankle), I walked over to Tequila Bookworm and ordered up an Eephus (a baseball term for a high floating junk ball pitch).

Usually I am not a big fan of brown ales but the oatmeal part had me intrigued. It was very dark brown in colour with a brownish head and, yes, lots of lacings were left along the inside of the glass. The beer was quite good and tasted like a brown ale Porter cross. It started off a little on the malty side, then came along a hint of chocolate, and finished with a nice bitterness.

A very nice beer but not one I could drink all night, but really enjoyed having a second one!

So why didn't I write about this Thursday night? Well, an hour long massage combined with a couple of beers and then grabbing a burrito on the way home made me a little over relaxed and lazy. It is a great way to end a day of work though!

I am quite looking forward to other beers from this brewery!

Hi Gord,
Thanks for giving our beer a try. We're glad you enjoyed it enough to order a second pint. We couldn't agree more, Tequila Bookworm is a fantastic spot. Hope you can make it out to our launch party on the 5th @ 3030 to try our other two beers. Details can be found
here.
Cheers!
Mark

We plan to be there!