Tonight Teena and I saw Dancing With Rage, with Mary Walsh from Codco and This Hour Has 22 Minutes at the Panasonic Theatre. I had never been to this theatre before and loved the intimacy of it, although I did feel it was quite warm.

I have been to a few single performer plays and have not really enjoyed them so went in with a bit of trepidation. Our friend, Franca, had bought the tickets and could not go so gave them to us, so if it was like the others, we would not be out anything.

When the play, started Mary Walsh came in from the back of the theater dressed in her old woman character. She was hilarious and was topical mentioning in the first five minutes events of the week. Then she was into her play.

Canada's favourite comedian, Mary Walsh, has created a new show that incorporates all the characters she has played over the years, including the infamous warrior princess, Marg Delahunty, with her armour-plated breasts and razor-sharp wit to “cut through all the BS."

The play was loosely based around Marg Delahunty searching for the child she gave up at birth at 16. Doesn't sound like a comedy but it was funny ... except what I have always found in one performer plays, too long. To me, an hour is perfect for one person but the audience needs a bang for the buck so they all get stretched to 90 minutes. I found myself looking at my watch for the last half hour, even though the play took some interesting twists.

For a fan, it was good to see and I would recommend it. For me, it was long. Teena is not not a fan of 22 Minutes, but was of Codco, and was a little bored. 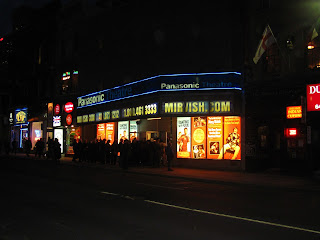