Beer of the Week - Smithwicks 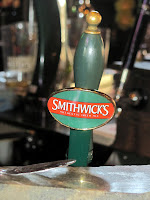 So St Patrick's Day has come and gone so I thought I would take a look at which Irish beers I have written about.

Wow! Was I surprised to discover that I had yet to feature one from Ireland. Knowing this, I headed out to right a wrong. It was time to do an Irish beer.

When one thinks of Ireland and beer, Guinness Stout comes to mind and I have had many of them in my day! In 1778, Arthur Guinness started brewing and selling his new stout now known as Guinness. His was not the first beer brewed and still being brewed in Ireland. Although bought out by Guinness in 1964, Swithwick's (pronounced as 'Smithicks' or 'Smitticks') is considered the oldest Irish operating brewery and beer recipe.

John Smithwick and Richard Cole opened the brewery in 1710 in Kilkenny in St. Francis Abbey. In those days, it seemed that laws disallowed putting personal names on companies. I am unsure what happened to Richard Cole but John Smithwick was known as quite the businessman so it is likely that he just bought out Richard's interest in the brewery. 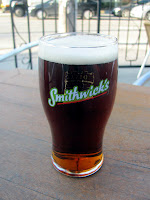 John's grandson, John Smithwick II, took over the brewery in the late 1700s and, as soon as the laws changed in Ireland, renamed the brewery Smithwick's Brewery. He also bought the land the brewery sat on. Since its opening, 9 generations of Smithwicks have been in control of the company over its 302 year history.

These days most of the Smithwicks beer is brewed in Dundalk but a small amount is still being brewed in Kilkenny for the local market.

The Smithwicks website has a much more detailed version of its company's history.

I saw that Smithwicks is now sold buy the can at the LCBO. Before and I'm really not sure about this, it was only available on draught. So I thought why not do a comparison while I'm at it? A great place to try the draught was on the patio of the Foggy Dew in my hood. So off I went!

I found a spot in the sun and ordered up a Smithwicks. It was a perfect pour which came to the table, a full glass with just the right amount of head. It was a brownish, coppery colour with a slightly off white head. Sheets of lacings lined the glass. The head and beer are quite creamy in texture, something I did not expect. It starts off a little sweet and finishes with a mild bitterness. It is an excellent sessionable pub ale. 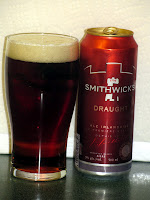 To ensure I had my notes right, I had another before walking back home with the taste still lingering on my tongue. Once home, I cracked open a can of Smithwicks, rinsed my mouth and sat down for a taste. The beer poured the same and I managed to get the same perfect head that the one at the Dew had.

The canned Smithwicks had the same taste, starting slightly sweet and finishing with a slight bitterness, but lacked that creamy texture for the mouth feel. I found that I missed it. The glass still had thick lacings along it so there couldn't be a difference in the malt. My guess is that the system used to dispense the draught version must use the same combination of nitrogen and carbon dioxide gas that is used to pour Guinness Stout.

So my verdict is that Smithwicks is a very nice draught to have at a pub but I'll pass on bringing any home in the can.