Beer of the Week - Woodworth and Edwards Honey Elixer Ale 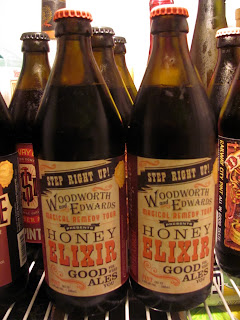 I have had a cold for the past three weeks and nothing tasted right to me so I thought it best to skip the Beer of the Week.

It's nice after my layoff to comeback with a fun looking ale, Woodworth and Edwards Honey Elixer!

Teena had presentations to do down in St Thomas, Ontario, and made a stop into Railway City Brewery to pick up some fresh Dead Elephant Ale and a few other of their beers for me. Yes, Teena does rock!

I have featured Railway City before as a Beer of the Week back in April 2010 but when I saw the label of one of the bottles she brought home, I knew I had to feature it. In fact, the brewery website does not even have any information that they carry this beer.

Woodworth and Edwards Magical Remedy Tour presents Honey Elixer "Good for what Ales you" harkens back to a time in the late 1800s early 1900s when "Snake Oil Salesmen" would travel with their medicine show and hawk their miracle remedies that was a cure-all  for anything and everything that ailed you.

There also was a time that beer advertising sold the healthy virtues of beer. The ads are hilarious and I have posted a few at the bottom of this post.

So time to crack open a bottle of Woodworth and Edwards Honey Elixer! 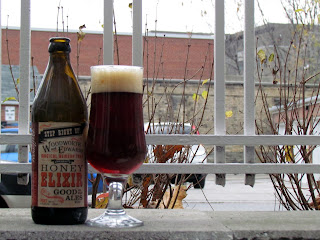 The Elixer (ale) pours out dark brown in colour with a full brownish head. The head takes it time to dissipate and of course leaves behind those wonderful lacings. The aroma gives me a sense that this will be a sweet malt forward beer, due to the maltiness in the aroma and perhaps a slight sense of caramel. No way I would have caught that in the past few weeks.

The taste is surprising and betrays the aroma. It has a slight watery mouth feel, starts with a quick slight sweetness before the hops come through for the finish. Only it is not quite finished as I feel the sweetness is trying to fight the bitterness of the hops. This does not have the heaviness that I usually find in brown beers. It is very nice. A very nice beer indeed.

If I lived down St Thomas was, I would be stopping in to get more of this. 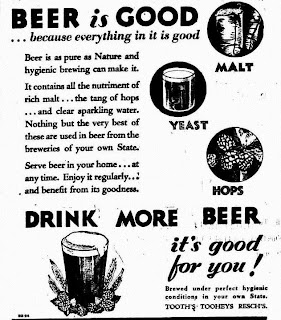 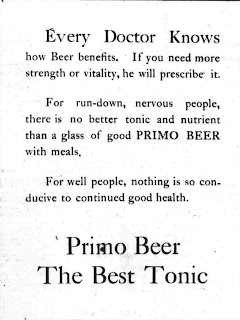