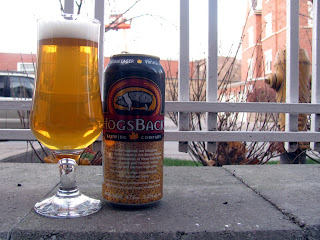 Hogsback Brewing has been around for two years, opening up in early 2010 in the Ottawa area but this week for the first time I saw it on the shelf of my local LCBO.  Two cans came home with me.

Opening the company was the idea of Paige Cutland, who served for 17 years in the Canadian Air Force and worked the the high tech industry for another 10. Three others, Frank, Gerry and Mark, joined in his dream and they came up with their anchor product, Hogsback Vintage Ale. Currently the brewery is brewing under contract with another brewery but hope to have their own building in a year or two.

The brewery is named for a vicious section of the Rideau River which had a set of three rapids. A ridge of limestone stuck out of the rapids that looked like the back of a hog and had more than one raft slam into it. The section was nicknamed the Hogsback. With the building of the Rideau Canal and engineering marvel which took six years and was completed in  1832, the rapids were eliminated. The beer pours a light golden colour with a nice white head. The aroma does not seem to be hoppy but more malty, a surprise to me in a lager. I'm used to slight hops or no aroma.

This is a nice flavourful lager. It starts slightly sweet, maybe a little biscuity, and finishes with a touch of bitterness but is full of flavour throughout. It is an enjoyable beer that will be joining my lager rotation in my fridge.