Searching the North Atlantic for Whales and Puffins 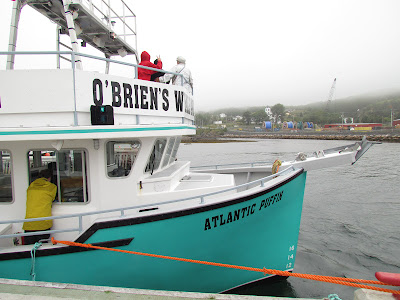 Today Teena and I headed out with O'Brien's Boat Tours to go, hopefully, whale watching and then over to Gull Island to see puffins and many other kinds of birds. In fact, there are over 140,000 birds on this island.

We were picked up by the company van and driven a half hour to Bay Bulls and from there boarded the Atlantic Puffin, a one year old tour boat. See the bow in the picture above. That's where we spent our entire trip.

It was cool and foggy as we pulled out of the harbour. Still people on the last tour said they saw 3 whales, so we were hopeful. 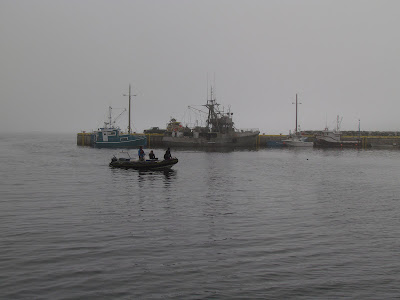 We were out about half an hour when we came upon lots of puffins and other birds, flying and swimming around. It was apparently a sign that there were many fish in the area and where there are fish, there are whales! 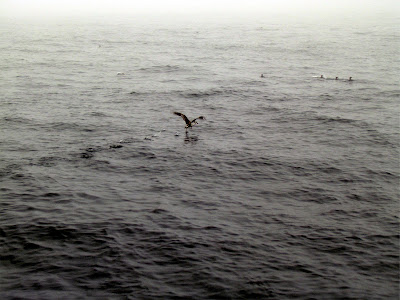 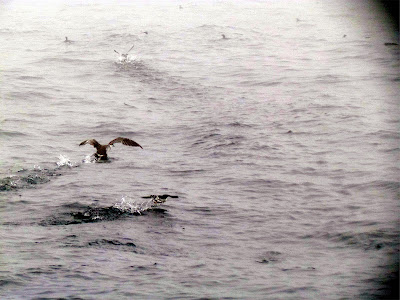 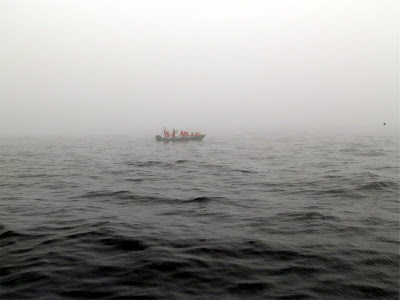 Our patience was finally rewarded with a siting just off the starboard bow. 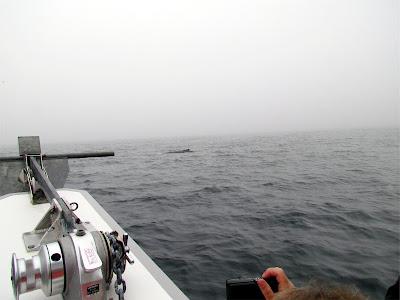 We were told to listen for spouts and that we likely would smell the whales breath before we saw them. A few minutes after the first sighting, we found two ... or perhaps they found us. They seemed to enjoy being around us and never tried to run away. They would go over to the small boat and back to ours. We were told we likely see very little of their tails as they were shallow diving. To see their tail in the air actually would be bad as it would mean they were diving deep and would be gone.

Here one just passes under our bow. See the blue. That is their fin and you can see them from a fair ways off. 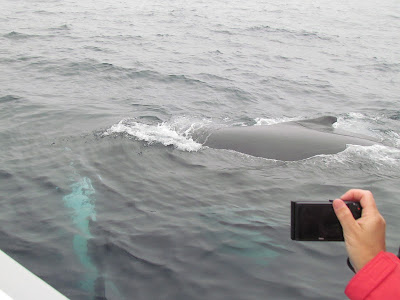 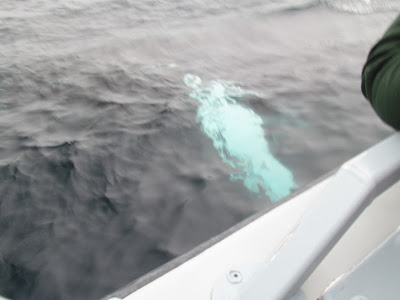 Here are two just ahead of us. 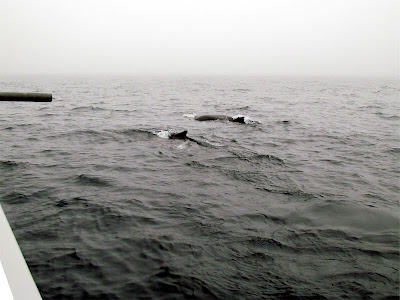 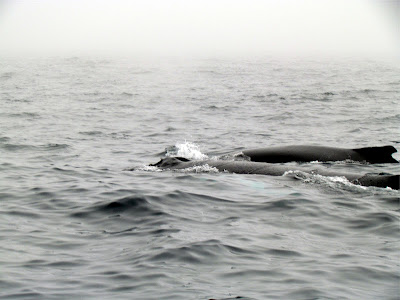 Showing his/her majesty and then just a bit of tail. 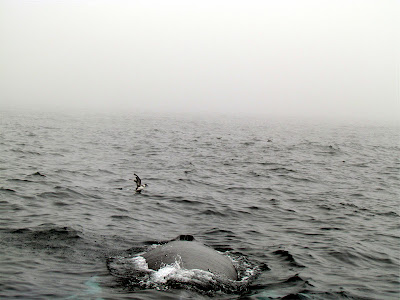 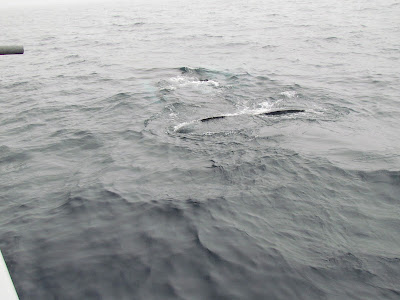 The only shot I took of a whale spouting. Teena caught a few. "There she blows!" 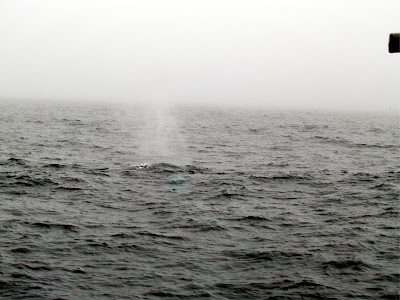 Finally a couple of shots of the whales close to the smaller craft. They sure had a great view! 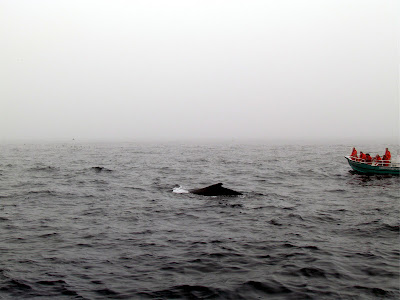 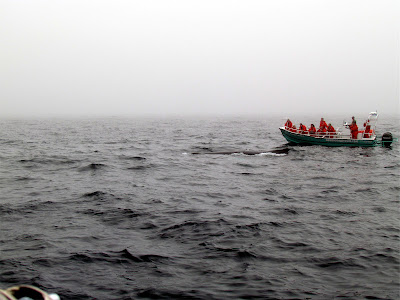 Then it was time to go. Just before we did, one came close and let off a big spout and we got to experience real close, whales breath. The only way to describe it is over concentrated turnip. It was very gross and, on the other hand, so great to experience being that close to nature.

I can only say it is one of the most amazing natural sites I have ever witnessed. It is awe inspiring and almost humbling to be around such majestic creatures. I would jump at the chance to do this again!

So it was off now to Gull Island to see the birds and puffins. Along the way, Teena had time to have our pictures taken. 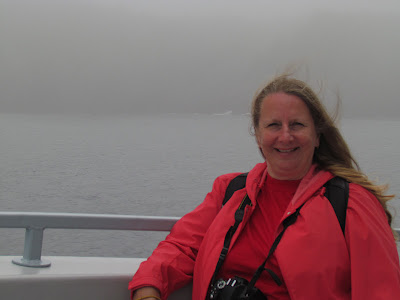 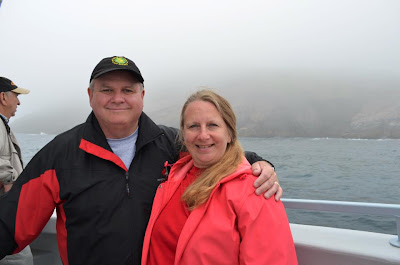 Then Gull island came into view, along with the birds 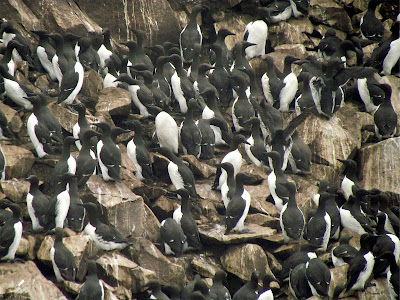 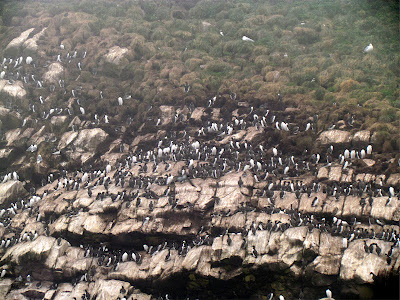 Teena in action. See how the island disappears in the distance. 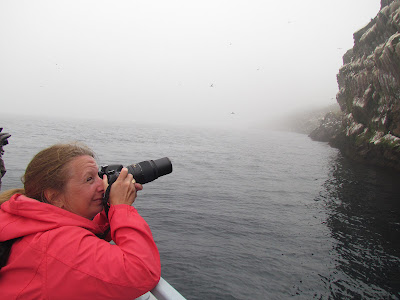 Then came the star of the bird show. The puffins! 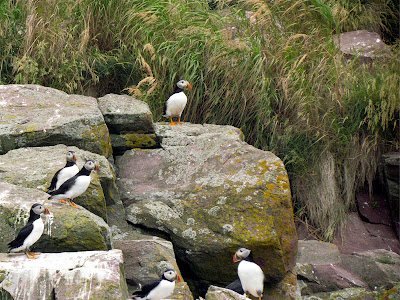 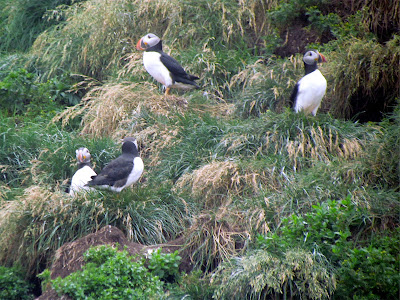 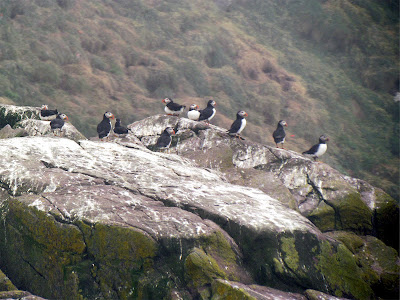 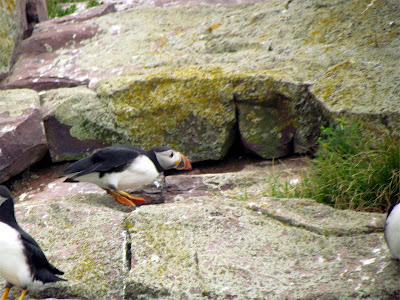 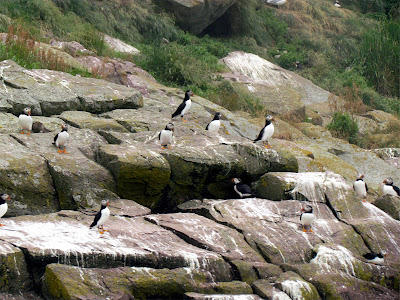 See all the holes in the picture below. Puffins mate for life and return every year to the same burrow to lay their egg. Yes, just one. I find that incredible! They live about 20 - 25 years. 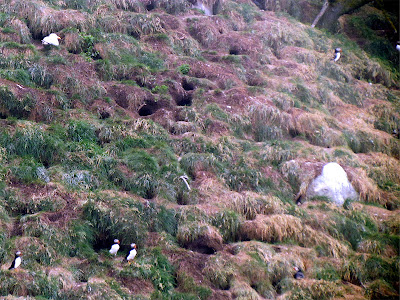 Today was just a fantastic day. A clear sunny day may have been nice but with the whales, I found the fog just added to the whole experience. From the magnificence of the whale to the beauty of the puffin, I feel very privileged to have witnessed all this in just a few hours. If you ever get a chance to do this, do so without hesitation!
Posted by Swordsman at 13:43

Amazing experience!! I want to go now, too!