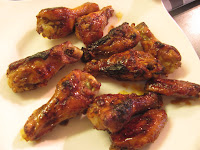 Teena and I were shopping and discussing what to have for supper tonight.

Then Teena had an idea. She was sure she saw a recipe for Rum and Coke wings on the 'Net. We have done Coke Cola wings in the past but the rum added another dimension. So Teena picked up some huge wings while I headed off for some real coke, not the sugar free stuff.

When we got home I found a good recipe online here.

First up I put the wings in a bowl and drizzled the olive oil over them and gave them a good toss to make sure they were all coated. Then I added the cayenne, salt and pepper and again mixed them all up well. After preheating the oven to 450 degrees, I put them in for about 30 minutes. After 30 minutes, I gave them all a flip. I cooked them for another 15 minutes but you made need longer as you want to be sure they are fully cooked. 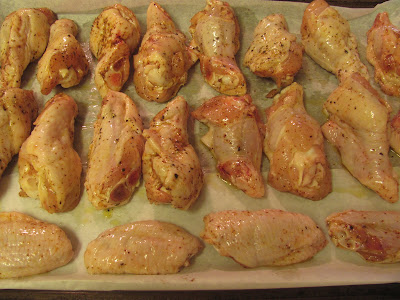 Next melt the butter/margarine in the pot and then stir in everything else, bring to a boil and then reduce to medium high. You want the sauce to thicken so leave it for about 30 minutes. Next time I would use butter as the light margarine is too water-based and the sauce did not thicken well. 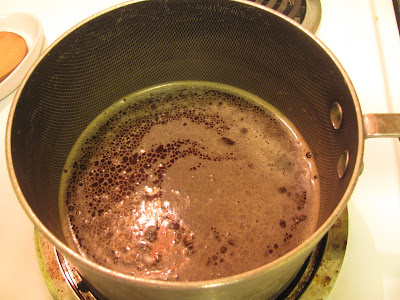 After 30 minutes, I took the chicken out, placed it in a bowl and poured the sauce over top. Then I placed new parchment paper on the tray, placed the wings back onto the tray and spooned the remaining sauce over top. 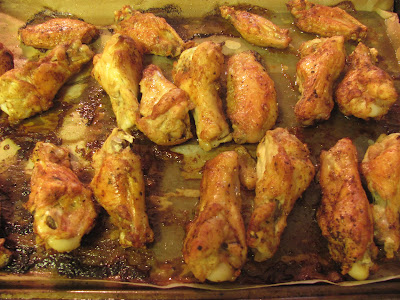 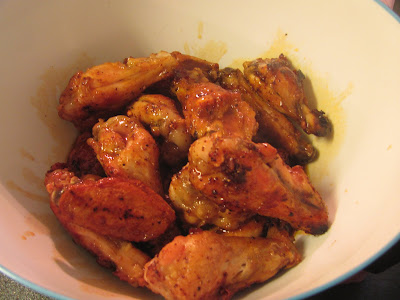 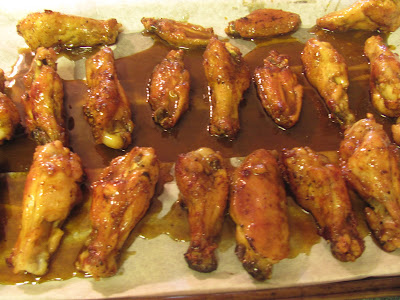 Put them back into the oven for another 5-6 minutes.When they come out, the wings will be glazed and smell wonderful. 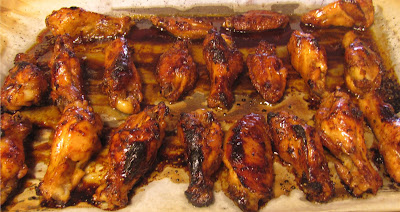 When you bite into a wing, it is crisp, gunky and nicely sweet. Then the heat starts to come on. Not an overpowering heat but a real nice hot. If you like them hotter, add more hot sauce, not at the end but into the sauce at the beginning. You do not want to spoil this sauce with throwing some on at the end. You could also add more chile powder or cayenne when originally baking them.

For me, I enjoyed this style of hot. it stayed with me long after I was done.

Yes, I will be making these again and recommend that you give them a try too. I think they would be up the the Lord of the Wings standards!
Posted by Swordsman at 19:18