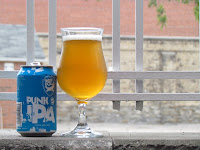 Can you judge a book by its cover?

Can you judge a book by its title?

For this week's Beer of the Week, I did just that.

I love the name Punk IPA. It's kind of kick-ass and the design of the blue can it comes in is eye catching. Also being an IPA, I cannot go too far wrong.

BrewDog Brewery has been around for five years, putting out its first beer in 2007.  Not only have they made an impression in their own country of Scotland but also around the world. On their website, they boldly proclaim, "We are unique and individual. A beacon of non-conformity in a increasingly monotone corporate desert. We are proud to be an intrepid David in a desperate ocean of insipid Goliaths. We are proud to be an alternative."

So how have they done this?

"This blond Belgian ale is infused with nettles from the Scottish Highlands and Fresh juniper berries. Only 12 bottles have been made and each comes with its own certificate and is presented in a stuffed stoat or grey squirrel. The striking packaging was created by a very talented taxidermist and all the animals used were road kill. This release is a limited run of 11 bottles, 7 stoats and 4 grey squirrels. Each ones comes with its own certificate of authenticity."

That $765 beer certainly put out the buzz on the brewery. The idea of putting a beer bottle in a dead animal, no matter that it was not purposefully killed, is one that puts me off.

After being criticised for producing an 18.2% stout called Tokyo, they responded by putting out an ultra low 1.1% alcohol beer called Nanny State. The name is a British term that conveys the view that a govern

ment's policies are overprotective or interfering unduly with the right of a persons personal choice.

They are also known for their Tactical Nuclear Penguin, a 32% beer which they annually produce.

"Brewdog paradox which was aged for 9 months in a spayside cask then 9 months in a smokehead cask, then taken to an icecream factory and frozen over the course of 2 weeks, then the non frozen liquid was drained off. Came out at 32% and at time of release was the strongest beer in the world."

I have not had any of the above but am looking very forward to the Punk IPA, which the brewery calls a "trans-atlantic fusion IPA". One very unique feature of this beer is the addition of Nelson Sauvin hops from New Zealand., which is supposed to "white wine fruitiness" to a beer. It also has Ahtanum hops which were developed in the US North-West and is a citrusy, floral aromatic hop.

Time to stop writing and go and try the beer.

The beer pours a light golden colour with a nice white head. The first thing I notice is the intense fruit aroma which comes off the beer. Very light, very fruity, and yes, it also imparts something that reminds me of a Riesling or a Gewurztraminer. It definitely does not smell like a 5.6% IPA but something lighter. 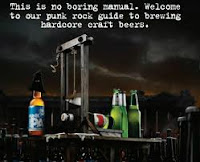 Punk IPA is a very light tasting beer but quite flavourful. It starts a little watery in mouth feel with full fruit flavours coming through in the beginning and finishes sour instead of the IPA bitterness I was expecting.

So I judged a book by its cover and did well. Although this is a very good beer, it's not a great one. I don;'t know about Scotland but this is a beer made for a muggy hot Toronto afternoon like the last few have been as this is very light, tasty and refreshing.

Oops! This brewery would hate that description. Sounds like a big brewery commercial!