Teena just finished reading Titanic, The Canadian Story, and recommended it to me.

This is the untold saga of the 130 passengers aboard the ill-fated luxury liner who were bound for Canada. Author Alan Hustak began his research ten years before the blockbuster movie came out. He conducted interviews across Canada with direct descendants and relatives of Canadians who sailed on the Titanic's maiden voyage. In the process he unearthed historic photographs and stories which contribute another dimension to the familiar tale. Hustak's chronicles are more poignant than fiction, such as the tale of Quigg Baxter, the young Montreal hockey player who risked all to smuggle his Belgian fiancée aboard, the Fortune family from Winnipeg which failed to heed a clairvoyant's warning; and Harry Markland Molson, the richest Canadian aboard who was persuaded by Toronto millionaire Arthur Peuchen to extend his stay in England and sail home with him on the Titanic. Hustak discloses the scandalous behaviour of second class passenger Joseph Fynney and tells of the young honeymooners Bert and Vera Dick of Calgary who started an enduring legend about the disaster. Some books insist the Titanic's last victim, found in a lifeboat a month after the disaster, was from New Jersey; others say he was from Chicago. In fact he was Thomson Beattie of Winnipeg. These stories and others have been overlooked or ignored by American and British historians and enthusiasts who have written about the Titanic.

This was a very interesting read. I never knew there were so many Canadians aboard and like many others thought that Halifax, where the recovered bodies were taken, was the only Canadian connection. When the author Alan Hustak first started his research, he was told "Canadians didn't exist in 1912. They were all listed as British, so no one knew who the Canadians were." 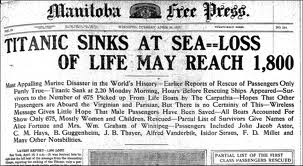 Husak tells the story of the lives of many of the Canadian passengers, mostly first class, before their fateful voyage.  He does this in quick fashion during the 153 pages, so the book never bogs down. The tale continues to what occurred on board for these passengers while the ship sank and gives a short summary of many of the survivors lives after.

At the back of the book, he lists the names of all the Canadians and whether they were in first, second or third class. He puts in bold the names of those who did not survive and those that did survive, shows the date they died. The last Canadian survivor died on March 4, 1993. I found myself referring to this section often.

I loved all the pictures and got a kick out of chapter 8, perhaps one of the shortest chapters I have ever read.

An interesting book that I would recommend too. Thanks, Teena!
Posted by Swordsman at 18:47

I thought you'd enjoy it.