This afternoon I was at the Bloor/Gladstone Library branch for a talk put on by Luminato as part of their Luminato at the Library series on the War of 1812.

James Laxer, author of his new book, Tecumseh and Brock, spoke on that subject and the War of 1812.

An internationally recognized authority on cross-border relations, James Laxer discusses his new book, Tecumseh and Brock, which focus on the War of 1812’s effect on the Native struggle for nationhood, the battle between the British Empire and the U.S. over Upper and Lower Canada and the friendship of Shawnee chieftain Tecumseh and Empire defender Major-General Sir Isaac Brock: two remarkable leaders whose legacies live on today. 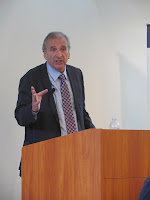 Not only is the War of 1812 a great topic of interest for me but Sir Issac Brock and the great Shawnee Chief Tecumseh are my top two favorite historical figures. Tragic figures really.

The place was jammed. My feeling was that they were expecting 50 or so people from the number of chairs that were set up.  When I arrived 20 minutes before the talk was to begin, I counted more than a hundred in the room. Double doors to the left of the author were opened up and more chairs set up there. It was not a full house or standing room only, but over flow. The side of the room with the double doors were all glass so they ensured that the sound was sent to that room so people could here while looking through the glass wall.

Nobody was disappointed. Professor Laxer is a very entertaining, humorous and informative speaker. I enjoyed the talk and learned from it. He spoke for 45 minutes on Tecumseh and Brock, with some great insight, and then took questions for half an hour, and likely would have for longer but was told his time was up. 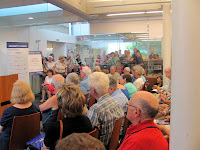 One entertaining moment was during the question and answer session. During his talk, Laxer said that Issac Brock may or may not have had a relationship with an 18 year old girl, Sophia Shaw in York, and that the book took a look from this. A gentleman stood up and said how he was related to Brock and the consensus of the family was, no, it did not happen!

Laxer then said the CBC would be disappointed to hear this as they are doing a TV movie about it!

Afterwards, you could, of course, buy one of his books which he would autograph and, yes, I came home with my own personal signed copy.

I can hardly wait to start the book! 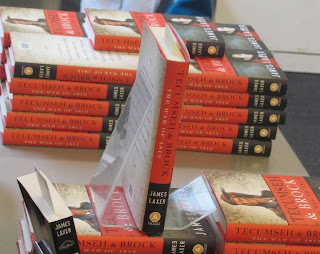