Beer of the Week - Hops and Robbers 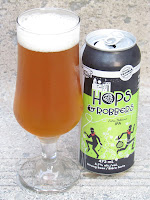 I have heard that there is a new beer on the market called Hops and Robbers from Double Trouble Brewing Company.

It has been written about on The Bar Towel, been on tap at a few places and a couple of friends have been drinking it. They have been asking me how I like it.

I haven't been able to give them and answer. You see, they could get it and I couldn't.

That was 'til now. Finally it has made it to my own local LCBO.

Just in time too as this is Ontario Craft Beer Week and I wanted to feature a couple of Ontario craft beers.

According to their website, it seems that two friends, Claude and Nathan, met in high school and both ended up working for the same brewery. They dreamed of opening their own brewery and this year, just a mere 15 years later, scraped up enough funds to do just that. Currently they do not have their own brewery building but brew out of Wellington Brewery in Guelph. Hops and Robbers is the first beer to come from this Double Trouble.

I found their brewer Paul Dickey to have an interesting resume. He has been brewing since 1986, was head brewer at Pepperwood Bistro and Brewery in Burlington, head brewer for Black Oak Brewing and Cheshire Valley Brewing Co. which brews out of Black Oak. He is responsible for the creation of Black Oak Summer Saison, which I love, the Nutcracker Brown Ale, Mill Street Coffee Porter, Kensington Brewing Co. Augusta Ale and now Double Trouble Brewing Company’s Hops and Robbers.

Time to try the beer!

After I pour the beer, I must admit I am having trouble with the colour. The best I can describe it is that it is a golden colour but with an orange tinge. I asked Teena, who had the same trouble, but felt there was a rose tinge to this. The beer has a white head which took a few minutes to dissipate, leaving behind some nice lacings. Floral hops come through nicely in the aroma.

The beer starts with a little bitter and then comes an wonderful citrus bitterness. This is not a complex beer but an excellent one. There are hops which produce citrus notes which are a feature of an American or West Coast style IPA, a style which I love and this beer has them. This beer to me has the perfect amount of bitterness throughout.

Hops and Robbers weighs in at 5.7% APV which is no surprise as IPAs usually come in over the 5% mark. The citrus tones make this a cleaner tasting, sessionable IPA.I would have no problem sitting down for an evening with friends with nothing but this.

I bought three cans and, hey, I drank all three cans. I think I just found a new regular for my fridge!