Book Review - Laura Ingersoll Secord: A Heroine and Her Family 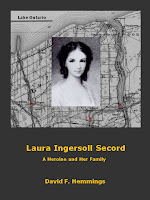 This week I found a book about Laura Secord. I have read about her many times in histories of the War of 1812 but never an entire book dedicated to her brave act during the war and what happened in the years after.
Laura Ingersoll Secord: A Heroine and Her Family describes the life and family of Laura Secord (1775-1868). The transcriptions of petitions, early publicity and plaques of or about Laura, her husband James and their son Charles and from a British officer, James FitzGibbon - give insights into Secord family opportunities and their financial status.

Laura Ingersoll Secord performed an act of heroism, extraordinary and courageous espionage conducted by a woman in war-time from behind enemy lines. It took a sensitive Lieutenant Governor of Upper Canada, and later the Prince of Wales, to recognize Laura Secord's heroism and her contribution to the British war-time cause in 1813. Her bravery and exemplary life epitomize the way ordinary loyalists lived with strife on the Niagara Frontier in the early nineteenth century.


With American forces encamped in Queenston and American officers using the Secord House as a base, Laura and her husband overheard the officers planning a surprise attack on James FitzGibbon's small but effective force at Beaver Dams. 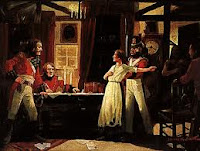 Fitzgibbon's small force, known as the Green Tigers, or my favorite, the Bloody Boys, waged guerrilla warfare on the American forces occupying the Niagara region. So effective was his operation the enemy forces could barely venture outside of the encampment or Fort George. An successful attack on them could and would seriously hamper the British/Canadian war effort.

Laura Secord, on the morning of June 22, 1813, set out to evade enemy patrols and fight through the wilderness to warn FitzGibbon. Instead of traveling in a straight 12 mile route, she instead did a circular 19 mile route in order to have an alibi of visiting different friends if caught.

I loved the part where she hoped her half brother would join her but was too sick so instead his daughter, Elizabeth, joined her. Elizabeth, though, became exhausted and could not continue.

In the end, Laura made it, warned FitzGibbon, who then set a successful trap for the attackers, capturing them lock, stock, and barrel.

I found it interesting that for many years the story was not told. The reason for this is the Secord's fear reprisals for many years after the war from Americans who lived across the Niagara River from them. The truth came out as the Secord's petitioned for jobs due to their effort during the conflict. In the end, the Prince of Wales found about about her act, publicly praising her contribution and awarding her 100 pounds, but that never came until 1860!

Author David Hemmings, who lives in Niagara on the Lake, wrote a very interesting book about a courageous woman who was one of the true, almost unsung heroes of the War of 1812.
Posted by Swordsman at 19:27

Oh this looks very interesting. I have heard he story but have wondered how she got so famous.