Tonight Teena, Shawna and I went to see Safe House, which just opened on the weekend. I like Ryan Reynolds, Denzel Washington and action movies so have been looking forward to this one since I saw the first preview.

The most dangerous renegade from the CIA (Denzel Washington) comes back onto the grid after a decade on the run. When the South African safe house he's remanded to is attacked by mercenaries, a rookie operative (Ryan Reynolds) escapes with him. Now, the unlikely allies must stay alive long enough to uncover who wants them dead.

I was not disappointed. The movie is almost non-stop action with a good plot and some twists and turns. The acting was excellent. Denzel was very cool in his role and Ryan Reynolds played the agent with no experience, trying to keep up with keeping Denzel in custody while staving off the bad guys, and there were a lot of them.

It was an action packed, noisy movie and one I will definitely seeing again when it comes on TV

Here's me, Teena and Shawna after the movie 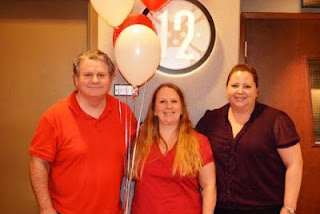