This week I get to review a beer that we cannot get in Ontario ... Stone India Pale Ale (IPA)

An IPA is an ale that is brewed with a hoppier flavour so the taste could survive the long voyage in the days of sail when England was shipping beer to their troops stationed in India and other warmer climates.

Stone Brewery is located in Escondido, California, a brewery which opened its doors in July 1996. Stone IPA has been brewed since August 1977.

(Note: Dry hopping is done by adding hops to the brew after it has gone through its boil. It significantly increases the hops character of the aroma and flavour of the final beer without increasing the bitterness.)

It has 6.9% Alc/vol and an International Bitterness Unit (IBU) of 77. So what is an IBU?? The IBU scale provides a measure of the bitterness of beer, which is provided by the hops used during brewing. This can be balanced by adding more malt to smooth the bite of the hop.

As an example, a light American lager is around a 5, an English Bitter is 25-45 and a Pilsner between 30-45. This is a 77. There are nice bitter beers, nice very bitter tasting beers, but could 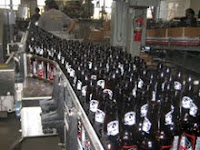 No! This beer has a pleasant bitterness to its aroma and pours a more amber colour than I expected. The bitterness is beautifully balanced and lasts right through to the finish. Due to the dry hopping the hoppy taste is, there but the bitterness does not overpower.

I enjoyed this beer immensely but there is one thing I didn't like... I can't get it in Ontario.
Posted by Swordsman at 20:51