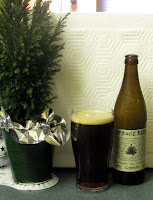 Last fall I read the book Captain James Cook in Atlantic Canada which was about the nine years Cook was stationed with the British Navy in Nova Scotia and Newfoundland. A very good book which I would recommend.

The book told how James Cook learned from aboriginal peoples how to use spruce in a drink to stay healthy during the long winters. I thought scurvy was a disease which only occurred on the high seas but during long winters without fresh fruit or vegetables, scurvy could also rear its ugly head.

He used this method in making a spruce beer. In fact, later in his sailing career he would make literally boatloads of spruce beer to take on his long voyages to ward off scurvy. Not a total way of preventing scurvy but the spruce provided enough Vitamin C that along with the fresher food and cleaner living conditions helped to make his crews the healthiest of those times. 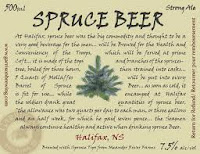 I wondered what spruce beer would taste like when I read an article in The Grid which talked about how Garrison Brewery in Halifax has made this beer the past couple of years and sells out in just a couple of days. The article then said 800 bottles have been shipped to the LCBO in Ontario.

Three of them now sit in my fridge.

When you think about it, spruce beer is a very original Canadian style of beer. It originated in this country and was constantly brewed for British troops stationed on the east coast of Canada during the 1700s.

In 1759, the Daily Order for the Highland Regiment was "Spruce beer is to be brewed for the health and conveniency [sic] of the troops which will be served at prime cost."

Canadahistory.com even has a 1760 recipe for General Amherst's Spruce Beer, part of which explains "Take 7 Pounds of good spruce & boil it well till the bark peels off, then take the spruce out & put three Gallons of Molasses to the Liquor & and boil it again, scum it well as it boils, then take it out the kettle & put it into a cooler, boil the remained of the water sufficient for a Barrel of thirty Gallons."

Garrison describes their method as "brewed with local Spruce & Fir tips, blackstrap molasses and dates. Dark amber and brown colouring. Aroma is a comforting mix of spruce boughs, caramel malts, molasses and dates. Complex and full-bodied, it balances the crisp bitterness of spruce and fir gum with the warming flavours of molasses and bittersweet chocolate." 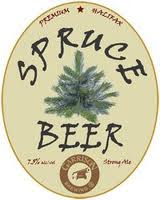 Now it's time to step back and taste a little bit of Canadian history.

The beer pours dark brown in colour with a brownish head and no sediment. I was not sure if there would be any sediment or residue left in the bottle. There appears to be none. I sense maybe chocolate in the aroma. Hard to pinpoint. There is a little something else that I can't put my finger on, which might be the spruce.

My mouth is assaulted with flavour with my first sip. It is a little overwhelming and for some reason unexpected. I think it is the pronounced sweetness that I did not expect. With lots of molasses in the brew, though, it is not surprising.

It does start sweet, then some bitterness comes through. There are many flavours involved here. The molasses does come through but so do more other flavours. You may have heard a beer described as "complex tasting" and this is definitely one of them. There are different tastes which comes through in this that I have not experienced before, likely the spruce and dates, which I am liking. The flavours seem to be layered throughout, making this an interesting and enjoyable beer to taste.

I can see why they line up for this at the brewery each year and I think I will need to hit the LCBO and stock up on this myself. It is a terrific winter beer ... and I won't have to worry about scurvy.

The Wigram Brewing Company in New Zealand bases its spruce beer recipe on the same one which was used by Captain James Cook when he first brewed spruce beer in New Zealand in 1773. Having now had the Garrison, I would love to try that one!

Note: I tried a few afterwards and found that the spruce aroma and flavour really comes through. This is a very excellent beer!