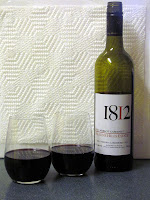 I was reading the December 2011 newsletter The Fife and Drum put out by the Friends of Fort York and saw this notice:

"The Friends of Fort York have appointed Palatine Hills Estate Winery of Niagara-on-the-Lake as an Official Supplier of its 1812-brand wines for a three- year period. Palatine's offerings of VQA Chardonnay and Merlot Cabernet wines are sold in select LCBO outlets throughout the Greater Toronto area. Each bottle sold in this market will give rise to a donation by the winery to the Friends. These monies will be used to support the Guard and other initiatives at the fort. A similar arrangement exists between Palatine Hills and The Friends of Fort George at Niagara."

Interesting combination for me. I enjoy wine and have a great interest in the War of 1812 and have visited Fort York, which is home to Canada's largest collection of original War of 1812 buildings many times. Now I can sip on a nice (hopefully) glass of red wine and support one of the most important historic sites in Toronto. I just had to give the Merlot Cabernet wine a try. I am not a fan of Chardonnay.

Palatine Hills Estate Winery is run by John and Barbara Neufeld, who have owned the property in Niagara on the Lake since 1972. They first planted grape vines in 1975 with Gamay and Gewürztraminer. Currently their fields have Cabernet Sauvignon, Cabernet Franc and Merlot. The white varieties include Sauvignon Blanc, Chardonnay, Gewürztraminer and Riesling.

It wasn't 'til 1998 that the winery bottled and sold their first wine. Palatine Hills is named after a gristmill which was built on the same land in 1777. Now fully in the wine business, John Neufeld became Chairman of the Ontario Grape Growers, a position he held for 7 years.

I love the fact that this family-owned business became a sponsor of two historic sites. It was something they did not have to do, but wanted to do.

It was while planting vines that John found American and British musket balls and other evidence that his property was the site of many skirmishes during the War of 1812. With his interest in history, he and his winemaker, Jeff Innes, came up with the idea of the 1812 brand which has been called the "official" wines of the upcoming 1812 celebrations. What great corporate citizens!

There is an excellent article of their involvement here.

At just $13.20, this is not a high end wine but is definitely in my price range. Time to pour Teena and I a glass.

Interesting in that I am so used to writing about beer, that attempting to describe a wine, I am finding quite hard to do. 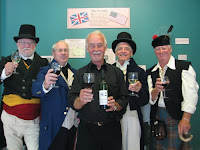 The wine is very nice tasting (a lame description I know), slightly fruity and not heavy and overpowering as some reds I have had in the past. It is a very enjoyable wine without that heavy tannin mouthfeel.

Teena describes it as full bodied, initially tasted of a little pepper but, as it sat, she found it became more sweet.

"Even if they were not supporting the war of 1812 celebrations, I would still buy it," said Teena of the wine.

That makes me glad as now I can bring home more. Sipping on a nice red wine while supporting a passion of mine makes me quite happy.
Posted by Swordsman at 17:01

It was delicious! Pleez buy it again :)