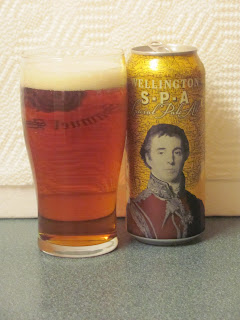 I have been actively searching for a true definition of what a light beer is.

To me, it is a beer which comes in around 4% APV which is what I am searching for. Many definitions seem to suggest that a light beer is one that is 4.5% or less but again, I can find no hard line.

Today I am trying another beer with less than 5% APV, Wellington S.P.A (Special Pale Ale) by Wellington Brewery in Guelph. The brewery concept is to "produce English-style real ales for the Ontario market."

One thing I love about English ales is that they strive for flavour no matter what the APV is. The idea is that people will be be willing to drink more if it tastes good even if it has less alcohol. That way they sell more beer. Brilliant!

S.P.A. pours a copper colour with a whitish head. I see lots of lacings along the inside of the glass as I tip and turn it. I do not detect any hops in the aroma, but can sense the malt.

My first sense when I sipped was a spiciness in the beer, which I did not expect. It is not a bitter beer nor a sweet one. It is a flavourful beer, though. After a few sips, I can sense a slight bit of hop bitterness. There is a slight spiciness to this, though. I don't believe that any spice has been added to this but it must come from whatever hops are used in this brew.

In any case, this is a very nice flavourful beer, which I am enjoying. I would put this 4.5% beer up against most 5% big brewery beers.

I believe this will be in my fridge in the future for my Light Beer Sundays! Well done!
Posted by Swordsman at 18:16