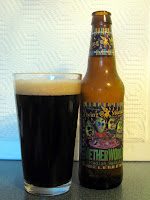 Last week I tried Flying Monkeys Anti-Gravity Light Ale as part of my Search for Taste in Light Beers.

I searched back to see what I had written about Flying Monkeys Brewery and found I have never done them as a Beer of the Week.

Their Hoptical Illusion is a regular visitor to my fridge and whenever Teena is on business in Barrie, she always stops into the brewery store to pick me up some fresh beer and any of the seasonal beers they have on hand. I have their hat, teeshirt and glass (2 actually) and, yes, I admit I am a big fan of the brewery.

What I haven't done is visit the brewery itself or featured it as a beer of the week. The Beer of the Week part I am correcting today. 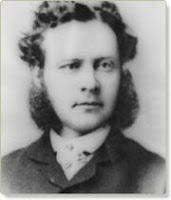 The brewery was opened in Barrie in 2005 as the Robert Simpson Brewing Company, the name honouring Robert Simpson (pictured right) who was Barrie's first mayor (1871, 72 and 76 ) and a successful brewer himself owning and operating Simcoe Steam Breweries.

Peter Chido, who is the head of the brewery and one of its brewers, decided in 2009, to take the brewery in another direction. At the time, the company had Robert Simpson Confederation Ale and Anti-Gravity Light Ale but it was time to get adventurous.

The owners sat down (three families own the brewery) and came up with a new name ...

"We were brainstorming ideas for the Anti-Gravity beer and flying monkeys was on the short list. The name came from a sign we have in the mudroom at my house that adds some humor to the constant nagging at my kids to put away their backpacks and stuff, or else 'Don’t make me get my Flying Monkeys'," said one of the original founders Peter Chiodoe "It originally comes from the Wizard of Oz, but the threat has found its way into the brewhouse." 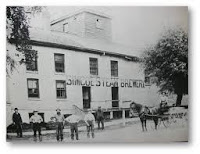 "Once upon a time, we were The Robert Simpson Brewing Company, but we’re morphing into The Flying Monkeys Craft Brewery. Why? Because being named for a dead white guy just isn’t very exciting. Where’s the fun in that? Beer is supposed to be way more fun than a history class. It’ll be weird for a while, but the new name opens up so many more possibilities for us to express ourselves (and be flakey).”

“So Bottoms Up, Friends - and Release the Flying Monkeys!”

They even received some valuable free press when one of their beers, Smashbomb Atomic IPA, was banned from the LCBO for a cartoonish picture of an explosion on the label.

"It really comes down to the imagery, as a depiction of an explosion," said LCBO spokesman Chris Layton."Many products are marketed today as provocative, edgy and tongue-in-cheek at times, but we're also sensitive that some consumers find depictions of either violence, explosions or bomb blasts disturbing."

In the end, Smashbomb and its label were allowed on the shelves of Ontario Liquor stores. It too is a beer that I really love.

Today, though, I am featuring their Netherworld Cascadian Dark Ale. It is not really a porter nor a black IPA, but kind of both.

It pours black like a porter with a brownish head. Lots of lacings line the glass when sipped. There is slight sense of chocolate and floral hops in the aroma. Hops in the aroma is not surprising as the beer is dry hopped with Cascade hops, which are also used with Columbus hops in the brewing process.

The roasted malts (4 kinds are used) come to the front when first sipped with tones of chocolate, and maybe a little coffee coming through. Just when you think this is a very nice porter, the hops come in for the finish. Not overpowering, they do make their presence known.

This definitely is a different style of beer and one which I do enjoy.

Hopefully this summer I will get to visit the brewery and, yes, will write and post pictures when I do.

Wow! I've been there about five times!