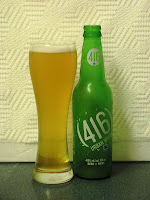 Two years ago, I featured Amsterdam Boneshaker IPA as my Beer of the Week. It was a high hopped 7.1% APV American IPA.

This week I am reviewing another beer from Amsterdam Brewery but one that is almost the opposite of the Boneshaker. A low APV wheat beer called 416 Urban Wheat.

Appropriately named for a few reasons. 416 used to be the only area code for the City of Toronto before they ran out of phone numbers. According to the bottle, this beer is also 4.16% APV. Amsterdam also brewed this to celebrate their 25th anniversary. During this time, they have brewed in 3 different locations. Currently the are located at the bottom of Bathurst at Front St.

Why a light beer to celebrate the brewery's 25th anniversary? It is explained in a Toronto Star article ... "Jeff Carefoote, owner of Amsterdam Brewery, says he's "kind of fat" and that's why he set out to make a low-calorie beer that wasn't watered down.

"Getting the calories out is a challenge. We tried different malts, hops and yeast. We were trying for good light beer flavour with lower calories. This has 20 per cent less calories than other light beers but you give up less alcohol as it's just under 4 per cent."

The beer is unfiltered and pours a cloudy straw colour. You can see the yeast sediment left behind after pouring on the the bottom of the bottle. Not a beer to drink right from the bottle for sure. Citrus dominates the aroma.

Wheat beer has a unique taste and I was surprised that I did not find it in this beer. The beer starts with a citrusy taste and ends on a sour note. Not bitter but sour.

I really like this beer. It is refreshing, tasty, and a little unique. A great beer to have while watching football on a Sunday afternoon. This is one more beer that proves that a light beer can still be full of flavour!

Thanks to Teena for letting me use her computer for this write up while mine is in the shop.