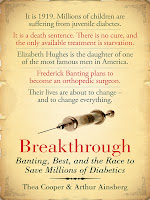 I am unsure where I spotted this book but as my son, Ken, came down with diabetes when he was 17, the subject of the discovery of insulin is interesting to me. Also it is a very Canadian story and a huge piece of our history.

Ask any Canadian who discovered insulin and they will tell you it was Banting and Best. Yet it was Fredrick Banting and Professor John Macleod from the University of Toronto who shared the 1923 Nobel Prize in Physiology or Medicine. This always puzzled me and I was hoping this book would clear that up.

It is 1919, and Elizabeth Hughes, the 11-year-old daughter of America's most distinguished jurist and politician, Charles Evans Hughes, has been diagnosed with juvenile diabetes. It is essentially a death sentence. The only accepted form of treatment—starvation—whittles her down to 45 pounds of skin and bones. Miles away, Canadian researchers Frederick Banting and Charles Best manage to identify and purify insulin from animal pancreases—a miracle soon marred by scientific jealousy, intense business competition, and fist fights. In a race against time and a ravaging disease, Elizabeth becomes one of the first diabetics to receive insulin injections—all while its discoverers and a little-known pharmaceutical company struggle to make it available to the rest of the world.

Relive the heartwarming true story of the discovery of insulin as it has never before been told, written with authentic detail and suspense, and featuring walk-ons by William Howard Taft, Woodrow Wilson, and Eli Lilly, among many others.

Although Leonard Thompson was the first person treated with insulin on January 11, 1922, when he was just 14, the book concentrates on Elizabeth Hughes who was among the first 10 or 20 patients to receive insulin and make a miraculous recovery. Her story is noteworthy for sure as she was the most famous, being the daughter of Charles Hughes who was the U.S. Secretary of State at the time. Some people even incorrectly credit her with being the first recipient of insulin.

I have always thought that the discovery of insulin was done in a spirit of harmony and determination. That sure was not the case. Banting had the idea and, along with Charles Best, did all the work in making the discovery. Macleod allowed the two to use one of his labs and gave a little funding money but no pay, and then left for a long vacation in Scotland. When Banting ran out of money, he sold his home and belongings to be able to fund his research. Only after the discovery was he put on the payroll. 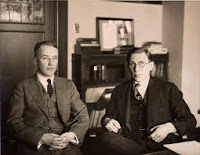 Biochemist Bertram Collip also was instrumental in the work as once Banting and Best discovered how to draw insulin from a pancreas, it was Collip who was needed to find a way to purify the solution consistently for human consumption.

John Macleod put his name on the paper and, as a leading professor at the U of T, took part credit. Banting used to burn every time he heard Macleod use the term "we" and was enraged when he heard he had to share the Nobel Prize with Macleod.

He refused to go to the Nobel ceremony. In fact, not only would he not sit at the same table with Macleod, he would not even have his picture taken with him.

Banting shared his Nobel prize money with Best and Macleod shared his with Collip. Insulin was one of the biggest medical breakthroughs of the 20th century and certainly a high point for Canada but nowhere is there a picture of Banting, Best, Macleod and Collip together. The picture shown here is best on the left, with Banting on the right.

The story is not only about the discovery but also how Eli Lilly in the U.S. and Connaught Laboratories in Canada worked to mass produce insulin. Interesting how in 1922 there were less than 10 diabetics being treated and a year and a half later, 60,000 alone were being treated in Canada and the U.S. Eli Lilly's work is the hero in the early development and today sells $3 billion annually of insulin. Connaught Laboratories gave great contributions later on to make an insulin that works longer in the body.

I especially enjoyed the ending chapters telling the story of how every one's life continued after the discovery. Sadly Leonard Thompson, the first person to receive insulin, died 13 years later of diabetic complication. Many others who receive the first injections lived very long lives.

This is an interesting, well told story and a book worth reading.

Note: I found it interesting that in the U.S., the book is sold as Breakthrough: Elizabeth Hughes, the Discovery of Insulin, and the Making of a Medical Miracle whereas in Canada it is sold as Breakthrough: Banting, Best and the Race to Save Millions of Diabetics. Easy to tell from which side of the border each is being sold.
Posted by Swordsman at 18:36