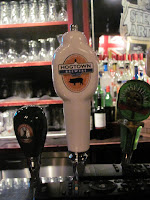 I was excited to hear that there is another new brewery in town, Hogtown Brewers.

Brewing under contract at Cool Brewery, their beer is currently only available at the Duke of Devon at First Canadian Place in downtown Toronto. It seems they are using that bar for a "soft launch" before expanding. So after work, I decided to trot on over for a taste.

The company was founded by six guys who decided to make a craft beer geared more to the mainstream beer drinker. Only five, though, have their profile on their website. I love their job titles such as "CEO & Chief Keg Washer", "President & Talent Director" and "Doctor of Operations & Resident Beer Geek".

There was an amusing story about the brewery bringing the beer to the Duke of Devon taps just a little ahead of schedule, which I found on BlogTO (January 20, 2012):

Hogtown officially launched this past weekend, slightly ahead of schedule. The owners of the Duke of Devon told Shippen (the president of Hogtown) that they'd start pouring Hogtown on Wednesday, just as soon as the current supply of Alexander Keith's Red was expected to run dry. Anxious to get their beer out there, however, Shippen and the rest of the Hogtown Brewers enlisted some friends and saw to it that the bar's supply of Keith's Red ran out ahead of schedule and Hogtown has been tapped at the Duke since Friday. 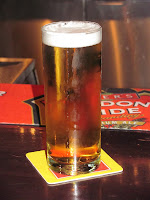 Now I have a problem here. The beer they currently have out is a Kolsch, which according to the German Beer Institute is "one of only a handful of traditional German ales. It is one of the palest German beers made. It is Germany's answer to the British pale ale. Kölsch is very subtle and delicate. It is light in both body and appearance, its maltiness is subdued, and its hoppiness is unobtrusive."

The problem is that I have only ever found one Kolsch which I have liked, Gaffel Kolsch. Hopefully I like this one but really I am expecting not to, which is not really fair to the company. So for this beer, I am looking more at the quality of which it was made and not whether I like it or not. Liking it will be a bonus!

The Duke of Devon is a very busy spot on a Friday night. Being downtown, it is a place that many in the downtown core seem to stop to "let go" of the week. That's what I like to do.

The bar was full but I managed to find a place at the bar with a chair right by the Hogtown Tap.

The beer comes in a tall slender glass, which according to the German beer institute is the correct glass. "A Kölsch is always served in a very narrow, straight-sided, cylindrical glass called a Stange (which means "rod" or "pole" in English)." 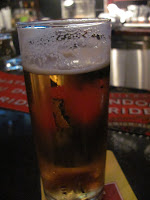 The room was a little dark but looking at it up in the light see it being golden in colour with a nice frothy white head. There is a little bit of hops to the nose. The head remains as it sits and I take pictures and when I sip it. There are lots of lacings along the inside of the glass.

I was surprised that it is a not a weak tasting beer, flavourful but not overpowering. Hard to describe but I thought it seemed to start like a lager but finished like an ale. There is a very nice hoppy bitterness at the end which I did not expect. It seemed to stay on the back of my tongue and hold. At first, I did not know if I enjoyed that particular hop aftertaste but by the end of the glass found myself ordering another.

The two fellows beside me were also having a Hogtown Ale and I asked them what they thought. I wished I remembered their names as they were nice guys which I ended up talking with for the rest of the night but that is a great fault of mine (I vow to work on that this year). One liked it enough and ordered a second and the other ordered something else.

I heard someone behind me then ask how I liked the Hogtown. I said I liked it, it was tasty and that this was my second. He liked that.

He introduced himself as Derrick, a sales rep from Hogtown (hey guys, he was a rep so I wrote his name down ... sorry because I also should have done the same for you!). He then asked the other two how they like the beer and both said they liked it.

As they answered, their beers hit the counter, a Hogtown and ... a beer that wasn't a Hogtown.

"What is that! I didn't order that! Where's my Hogtown?"

It was funny! If you think not, maybe you just had to be there. 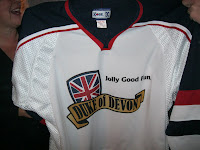 Derrick was a nice guy and we spent about a half hour or so talking about the brewery and the craft beer business in general. It was fun and I learned a lot about bringing a brand new beer from a brand new brewery into the market. Start-up costs for things like glasses, beer mats, those little signs on the table all add up.

A salesman from a big brewery would have bought us a round. Being a start-up trying to break the market without big bucks behind them, he never offered.

No matter. Derrick left after meeting a friend and I ordered another as it is a good beer.

I came in thinking I likely would not like this beer and found he opposite. Not only did I enjoy the beer, I also enjoyed the energy of the pub and the new people I met. One of the joys of sitting at the bar in a pub is the chance to meet new and interesting people.

On one section of the Hogtown website, they finish with "So the real question is, What next? We are putting the finishing touches on a hoppy, aggressive IPA that will be sure to impress even the most discerning beer drinker."

I'm looking forward to it!

Nice to meet you tonight Gord, glad you enjoyed the beer!