Beer of the Week - The Beers of Dockyard Brewing Company, Bermuda 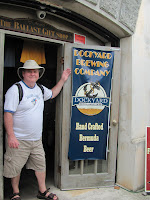 Before we left for vacation, I did a little research and found that Bermuda had one craft beer brewery, the Dockyard Brewing Company, located, of course, at the Dockyards.

The brewery actually started further up the island in the Flatts as the North Rock Brewing Company in 1997. It outgrew the facility and, in 2006, formed a partnership with the Frog and Onion Pub and moved all it's equipment down to the Dockyards.

They had the space, we had the expertise and so today we brew the same line of fine beers that we have done for these past twelve years.

The Frog and Onion was opened in 1992 and is named after the owners who formed the original partnership when the pub first opened. One owner was French (frog) and the other was Bermudian (known as Onions) Cute. The pub is great. Teena has an excellent review here.

They have their five beer sampler, which is what I went with. 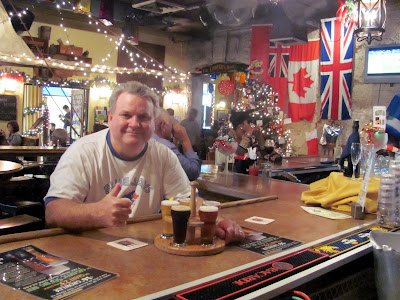 Time to taste! I was hot, tired and delighted to be here so do apologize as I forgot to take a picture of each beer.

The first one up is their Whale of a Wheat which they describe as "a typical German Hefeweizen, this light and refreshing ale is made using a combination of wheat and barley malts from Europe. Brewed using only German hops this summer thirst quencher is served with a traditional slice of lemon."

I prefer the beer not to be served with lemon so I can taste the true flavours of the beer. I did not know at the time it would come which a wedge on the lip.

This is a light straw coloured beer which I could sense the wheat essence in the aroma. It is very light tasting but the wheat comes through in the finish. I enjoyed this beer but really should have asked for one without the lemon fro a true taste. This is a nice beer, which is the case with me with wheat beers, is great to have one or two of before moving onto a stronger beer. 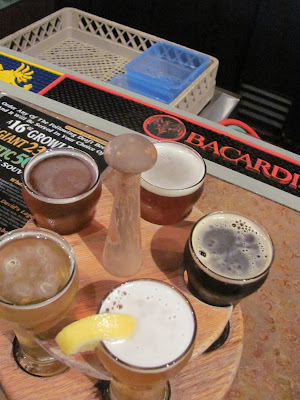 Next up was the St David's Lager. "Brewed in the Pilsner style, this light, straw-coloured beer is delicately hopped with the finest European hops giving it a satisfying crisp flavour with a dry finish."

It is straw-coloured, darker than the wheat and I could sense hops in the aroma. There is a nice taste to this from start to finish. The beer starts with a slight bitterness and finishes a touch more bitterness in the finish. This is a very good pilsner, one I could have many of, especially on a hot day. Teena had this one too and enjoyed it. If sold here, it would be a regular in my fridge.

Charles, our bartender, threw in their seasonal Honey Pale Ale so I would taste everything they had to offer. Described as "a smooth unfiltered, dry hopped light pale ale. Bermuda honey added during brewing comes through as a subtle aftertaste which increases as the beer begins to warm."

It was a light amber colour with a slight sweetness in the aroma. Although unfiltered, it was pretty clear. I found this beer to be very watery. The hops do try to come through but are watered away. I did not like this one at all. 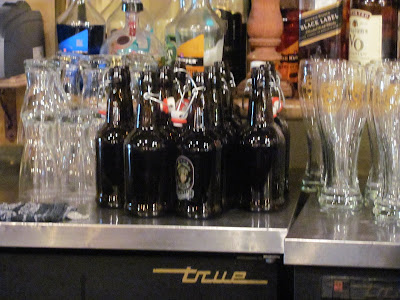 Somer's Amber Ale is the flagship beer of the brewery. It is brewed with Noble hops as a traditional English Bitter. This ale is also sold to the Swizzlers Inn and rebranded as Oscars Ale, where I have already enjoyed a few. Up until today, I did not know it was from this brewery.

It is ambered-coloured as the name states and is a very nicely flavoured beer throughout. A great session ale which starts a little malty but has the hops come through in the finish. The hops are not overpowering but nicely balanced.

Now to the stars of the show. The heavy hitters which I have been looking the most forward too. The IPA is the brewer's favorite and the Porter is the favorite of Charles. 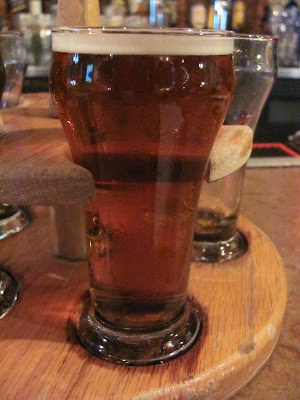 First up is the Trunk Island Pale Ale, or Trunk IPA, an Indian Pale Ale that they play with the initials on. It is brown in colour and, yes, there are hops to the nose! Although it has sat for awhile, it still has a little head left and there are nice lacings as I sipped.

It starts a little watery, almost tasteless, but then the hops come galloping in and stay well through the finish. This is a very good IPA which I could see myself having a few of. Nicely done! 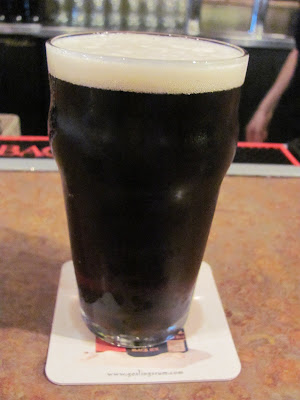 The last one for me to try was the medium hopped Black Anchor Porter. I have come to really love porters and was anxious to try this one.

It pours almost black and, still after this long while, had head left. The roasted malt aroma comes through and I think lacings line the glass after sipping. Surpisingly, this has a much more silky mouth feel than the porters I am used to. It is full-flavoured with the taste of coffee coming through. Nicely balanced, between the hops and the malt and finishes with a bitterness which comes more from the roasted malt than the hops.

An excellent porter. As shown by the picture above, I had another afterwards.

Also pictured above are 16 oz growlers just waiting to be filled. I had Charles fill two for me to take back to Canada ... the IPA and the Porter. It was also nice knowing when we left that I still could have the Somer's Amber Ale (Oscars) back at the Swizzler, a pub beside our resort.

The only disappointment (besides the honey ale) was that the brewer was away on vacation so I could not get a tour of the brewery itself and meet the brewer. That would have been the icing on the cake!