The Year I was Santa

Tonight I watched a show called Mall Santa, a documentary which was shot in 2008, about three Toronto area men who worked as mall Santas.

It was quite enjoyable and took me back to the year that I was Santa. Wow, that had to be over 25 years ago.

In the Scout organization, Beavers is the youngest age group in the organization. After that, a boy becomes a cub, then a scout. Ken was in the Aurora Beaver Colony.

For Christmas, the Beavers did a gift exchange and it was decided that Santa should distribute the gifts. One of the leaders, Jim, took me aside when I came to pick up Ken after a meeting and asked if I would be Santa for their meeting next week.

I wasn't hesitant about playing a Santa and felt I could do it well. My worry was Ken would be there. Would he recognize me? After all, he still believed.

So for a week to throw him off whenever Christmas came up, I would say in my best pirate voice "Argggh, Merry Christmas me Buccos!" 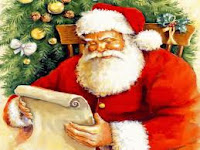 I didn't want him to recognize my HoHoHo.

So the night came and I dropped him off at the meeting, then raced home and changed. I found I couldn't drive with the pillows jammed in my pants, just didn't fit behind the wheel of the car, so took them out, drove to the church and entered, as instructed, through the side door and into a nearby room, where I jammed the pillows back in.

There I waited for about ten minutes inside a warm room, covered head to foot in a Santa outfit, in a hat, boots, wearing that full Santa beard and packed with pillows which acted like extra insulation. Santa had a good sweat on by the time his cue came.

So I strode down the hall, shaking my bells and letting out my best HoHoHo!.

I came into the room and saw the faces of 20 boys light up, including Ken's. Great to see through Santa's eyes. 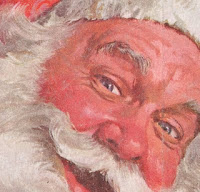 So I sat in the chair by the presents. The only game plan we had was that I come in, give out the presents and go. The only thing was, I knew Santa had power. Santa was not just going to distribute gifts. He was going to make them work.

But doing what for Santa?

Well, Santa explained they would have to do something for him before they were given their gifts. He wanted to hear a Christmas carol!

They quickly decided on a song and sung their hearts out. Yes, it is fun being Santa. Santa has full control!

Then came gift giving time, which made me nervous. I would pick up a present, call out the name on the tag and the boy would excitedly run up get his present, then bound back to his spot.

Finally the moment came. The present with Ken's name on it. I knew I could not overdo or under do this. I had to be exactly the same as the other kids. He came running up like the others, and when he got to me, suddenly was shy.

I was surprised. He is a class clown and looking forward to this but was shy around Santa. He took his present, said thank-you and ran back to his spot.

Once the presents were all given out and opened, I asked the kids to sing me another song as I left. I can still remember their voices singing as I walked down the hall and ducked into the room where my street clothes were.

Ken was quite excited when I picked him up and told me all about Santa's visit.

I was told by the adults that were there that I was a great Santa and I believe that I was. I had pulled it off! Ken's friends did not recognize me and, more importantly, Ken did not.

A few years later, I told Ken the story. He told me he remembered that. No, he did not 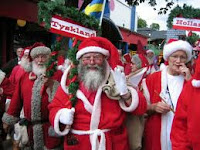 know it was me but there was something a little familiar about Santa that baffled him.

I really had done it.

Only one picture was taken of me that day. I took a picture of myself in the mirror before leaving the house. If I still had that picture, I sure would post it here.

Christmas is for kids and I enjoyed putting some Christmas into this small colony of Beavers.
Posted by Swordsman at 23:29