Beer of the Week - The Beers of Hoss Brau-Und 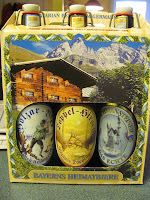 Knowing that I love trying new beers, my sister Judy and her husband Doug gave me the Bavarian, Alps Collector Bottle Gift Pack for Christmas. Back in April 2009, one of my Beers of the Week was Doppel Hirsch Doppelbock which is in this set, but there are two beers I have not tried. It should be interesting re-trying the Dopplebock to see how my tasting this year compares to then.

When I originally researched the brewery I could find next to nothing on it's history. The brewery website is all in German with no English translation. This year is no different. The most I could find is that the brewery is one of the oldest privately owned breweries in Bavaria, perhaps 350 years old and is located in Sonthofen in the Alps. A very scenic town I would love to visit! It is pictured in the bottom of this review.

So it's time to try their beer.

First up is Neuschwansteiner Das Echte which is a Helles lager. According to the German Beer Institute website "Hell is the German adjective for "light," while Helles is a noun used in the sense of "a light one." But unlike in North America, this designation refers to color only, not to the beer's caloric or alcoholic strength. If there is one beer style that typifies the greatness of German, and especially of Bavarian beer-making, it is this straw-blond lager" 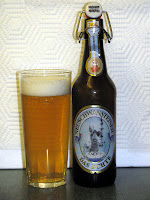 On the label is a picture of a castle, and it is not fantasy or Disney but a real castle in the Bavarian Alps. The bottle is a 500 ml tall with a swing top cap. I am looking forward to this!

True to it's description the beer is straw coloured with a white head. There is a slight hop aroma to this. At first the beer tastes a little weak and watery, but then the delicious lager hop presence makes itself known. This is no North American big brewery tasteless lager but a lager made the way one should be.

A fabulous beer to start my tasting. 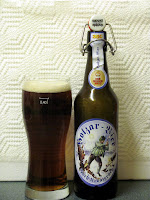 Next up is the 5.2% APV Holzar Bier. I found this Many websites call this a Munich Style Dunkel which the German Beer Institute describes "Like all Bavarian-style beers, Dunkel tends to be very malty with only a gentle hop accent for very little hop bitterness. It has almost no nose. Today Dunkel is still made primarily in Bavaria," I like dunkels. This should be interesting.

The beer pours brown in colour with a with a white head perhaps with a slight brownish tinge. As said above, there is no aroma to this. This beer like the last one, starts off a little tasteless and watery, then the malt comes though. There is a slight bitterness to this, which I believe must come from the roasted malt as I do not detect any hop bite to this. To me this dunkel is a little weak tasting but still very enjoyable. 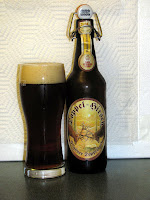 Last up is the Doppel Hirsch Doppelbock weighing in at 7.2% APV. "Bockbiers rank among the heaviest and maltiest, yet smoothest, brews in the world. Doppelbock (literally "double bock") is a stronger and usually darker version of the Bavarian Bockbier. It is exceptionally malty, with very little bitterness." Dopplebocks were originally made as liquid bread for monks to drink during their periods of fasting.

This beer pours very dark in colour with a brownish head. I can smell the malt in the aroma. It definitely has a thicker mouth feel. No wateriness here!

It is not a bitter beer but one which is very malty. This is a full flavoured beer! The taste is immediate. A slight bitterness comes from the malt, and the flavour is full from start to finish. I really like this beer.

What was my original review? I haven't looked at it till now "I popped the top and had a pour. The beer does pour with a nice head. It is a dark coppery colour with a inviting fragrance.

In tasting it, I can see why this is considered a cold weather beer. It has a heavy, sweet, malty taste which reminded me of caramel. It is an excellent sipping beer, not one you would have too many of."

Caramel! That is the flavour I was having a hard time describing today.

All three beers in the package were enjoyable. I love how they were all true Bavarian beers (biers?) of different styles.

Thanks Doug! Thanks Judy!

I had fun giving these a try!