I participate in the 5th Annual Canadian Book Challenge, which is run by John, way up in the North-West Territories. who challenges readers to read 13 books set in Canada, about Canada or by Canadian authors in one year. There are no prizes but it is an interesting challenge as people post links to their reviews and tallies are kept.

Every once in awhile he does post a monthly challenge where a prize is awarded. A couple of months ago I won the monthly prize and received Strongman, The Doug Hepburn Story by Tom Thurston.

Tom Thurston has written the first biography of one of Canada’s athletic legends, Doug Hepburn. Born in Vancouver with a club foot and a severe alternating squint, Doug decided as a boy to surmount his disabilities by training with weights, setting his sights on becoming the world’s strongest man. And this he achieved. Doug is now known as the grandfather of modern “power weightlifting. 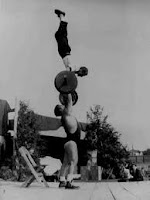 For those interested in building a super-strong body that will last well into old age, Doug’s complete, drug-free training secrets are revealed in a way that are easy to understand and employ. For those looking for the inspiration to tackle some of their own goals, Doug Hepburn presents a fine role model. For all Doug’s successes as a strongman, his life was filled with much sadness, many setbacks and even, at times, poverty. Thurston’s biography does justice to all aspects of Doug’s life, illuminating the fortitude with which he met his many challenges. A truly splendid biography with many black and white photographs.

It is a very interesting story. Doug did set out with disabilities with an incredible goal in mind. It was discipline and determination and willingness to accept help which took him to Stockholm in 1953 for the World Weightlifting Championships which he easily won.

When he did not get the adulation, fame and riches back home in Canada, which he felt he deserved, he gave up and went on a long spiral downward. A note here is that in Canada if you are not a hockey player, figure skater or the winner of the 100 yard dash, international successes are not generally heralded or even much publicized as they should be.

Doug Hepburn could not accept this, it seems.

His struggle to dig himself out of the hole he had dug for himself is good reading. The story was dictated to Tom Thurston at nights.

"Mighty Doug had found that by leaning back in an easy chair with the lights out and his little black cat, Cupcake, curled on his chest, he could close his eyes and experience his past as vividly as if he were back in time."

He does lay it all out, the good and the bad. I found Doug Hepburn to be a good person inside but a very screwed up individual.

It is a quick, very interesting read. Glad I won this prize. The book is worth reading.
Posted by Swordsman at 11:20